We went for a run through a path Uncle Ed told us about.  It went behind some of the neighborhood houses and near some lovely ponds.  There were a bunch of kids assembling some steps and little bridges over a pond while we ran through.  And a very nice run – although muddy!

Another Day of Rest

We spent the rest of the day hanging out in Ed and Jane’s very cool TV room, with the curtains drawn and the DVD player going.  We watched Ocean’s Eleven, which is a very entertaining movie.  At one point, Joanna walked into the house to see us and we were more than a little embarrassed to be lounging around on such a beautiful day.  But then again, we’re really tired of sight-seeing and doing stuff.  And we really wanted to see Ocean’s Eleven.

So we hung out with Jo for a little while and made plans with her tomorrow.  We also decided that we were going to make Phad Thai for Jane and Ed for dinner.  And Jo – because she was playing a late round of golf – asked us to save some for her and she’d drop by later.

After the movie, we went into town to a Thai Grocer that Jo told us about. We found everything we needed except for Tamarind Juice, which we can’t seem to find anywhere at all.  But we’ll be all right without it.  Then we visited a fancy grocery store called “Kowalski’s” to get some other stuff, including ice cream.

And back at Jane and Ed’s, we got down to business.

I don’t know what it is about this dish, but we always make the BIGGEST mess when we make Phad Thai.  It’s probably because of all the stirring of sticky noodles.  Regardless, we just can’t seem to cook this without much of it ending up on the stove and surrounding countertops. 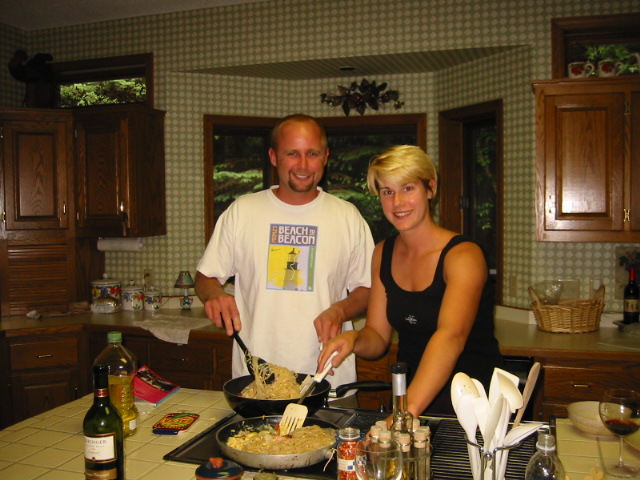 Despite the mess, dinner was good.  Jo stopped by with her friend Beth after their golf game, and they finished up whatever was left in the wok.  Then Jane’s “vine” arrived.  This was a much-anticipated delivery for the household.  There’s an area above the kitchen where the “vine” used to live before Jane sent it out to be redecorated, and she was excited that it would be filled again.  Her boys (Ed and my cousin Zack) were recruited to re-hang it above the kitchen – a process that required two ladders, good balance, and a solid sense of humor. 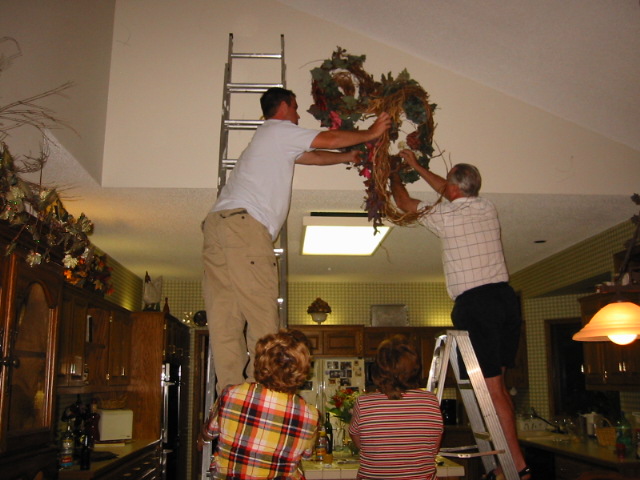 The Hanging of the Vine

Jon and I – because there was nothing else we could do – stretched out on the floor and supervised.