Today we piled in the Kiboko Bus-Truck to go to Arusha, near Mt. Kilimanjaro.  The Aussies have a game they play that – when you drive under a power line – you have to raise one or both of your hands.  The number of hands depends on the size of the power line.  There really isn’t much more to it than this, but it definitely entertained most of the truck for a while.  They say that once you go driving in Australia for 12 hours you will find creative ways to entertain yourself too.

Women in Africa really do walk around with large bundles on their head.  Laundry, groceries, coal, bundles of branches – we’ve seen it all.  It looks like it’s much more efficient than carrying an awkward bundle with your arms, but I can’t imagine doing this in New York.

At some point in the ride, Jon was torturing me by singing and distracting me from soundly trouncing the Aussies at Uno.  The particular song on his mp3 player was “Bohemian Rhapsody” by Queen, so when he started singing it half the bus followed suit. Next thing I know, we’re all singing the various verses as loudly as we can.  It was hilarious.

We stopped for lunch at a cute bush campsite on a little river/creek.  It had a picnic bench that read “No Guts, No Glory”.  I’ve no idea the significance of this statement at the campsite, but it was all very sweet. 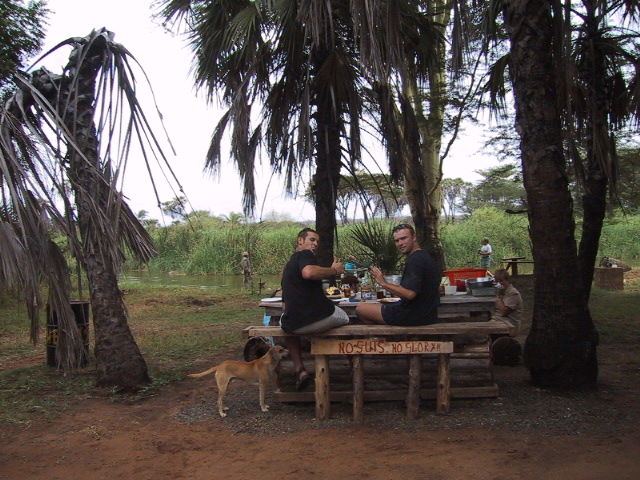 The closer we got to Arusha, the higher in elevation we got.  We pulled over to the side of the road and Brendon (the guide) pointed at a large mountain and said, “There’s Kilimanjaro!  Let’s take pictures.”  So we climbed on top of the bus-truck and posed for some lovely photos: 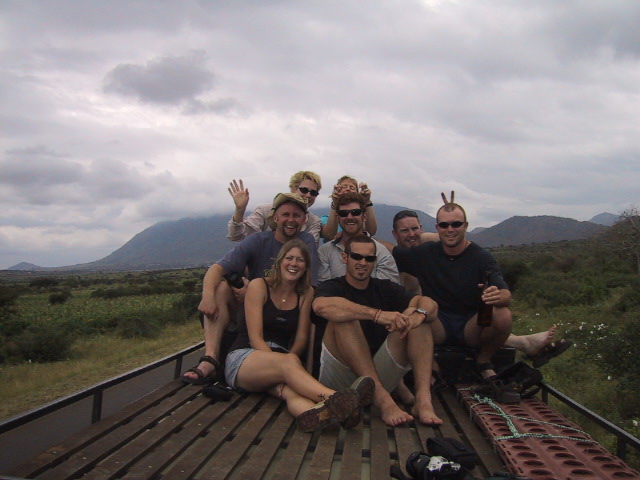 The Aussies used this break to film a little segment for their video, in which Jason (on the far right) tried to befriend some local kids who came to the roadside to look at us.  But they took one look at him and ran for the hills.  Smart kids.

Then…  about 15 minutes down the road, we started seeing signs for “Kilimanjaro –> 100km”.  Brandon looks up and says “Ooops.”.  So much for the knowledgeable guide!  Seriously, though, we did get some nice pictures of “Faux Kilimanjaro”.  I wonder what the real one looks like.

The campsite we are at for the night is called the “Maasai Camp” and is guarded by the fierce Maasai warriors.  Brandon says it’s the safest campsite he’s ever been to.  It’s been raining, so we put the waterproof covers on the tents.  Then, of course, we hit the bar where we played a huge game of “3 Man” with some Brits.  The fun part of this game is that you make up rules that everyone must abide by.  Some examples:

The rules got even nuttier as the night rolled on and it was such a riot.  (For those of you who are wondering if you should call Alcoholics Anonymous for me, I played with a Sprite.)