For the next few days, we’ll be traveling with a sub-contracted guide service into Ngorongoro Crater and the Serengeti because the Kiboko Bus-Truck can’t do the roads.  So we packed up the tents and consolidated our crucial stuff into one backpack.  4 Land Rover Defenders arrived to cart us and our gear away from Arusha for three days.  We also got a safety talk about our campsites.  Namely: don’t keep food in our tent, avoid going to the toilet at night and – if we have to go – use a bright torch (flashlight).  And most important: if we hear anything outside the tent, STAY IN THE TENT.  Then we got a bunch of stories about lions scratching their backs on tents, bush pigs ripping open tents for toothpaste, and hyenas running off with little children.

In our truck, we had myself, Jon, Mathilde, Juliette, and Kerry.  The four Aussies went with Vladimir the colonel, who didn’t look very pleased with arrangements.  They promptly put toilet paper on their heads with a red circle on the forehead, and screamed “Bonsai!” like Kamikazes.  At the first stop, Vladimir moved from sitting in the back with the Aussies and sat stoically in the front seat for the rest of the trip.

About 60k of our drive to Ngorongoro was on paved roads.  The remaining 90k was completely unpaved and bumpy.  But the views were spectacular.  This is what one thinks of Africa: plains and plains of brush surrounded by mountains in the distance.  There were many Maasai on the plains herding their cattle.  The Maasai wear right red cloaks because the color is ominous to enemies, keeps lions away, and doesn’t show dirt easily.  Each one of them had a long stick (club) and elaborate earrings, but very few of them waved at us.   Along the way, we passed some ostrich, zebras, and donkeys.

I’ve never ridden in a Land Rover before, and I have to say that it’s not “all that”.  We stopped in the dusty town of Karatu, where we learned that one of the Land Rovers had lost its suspension and had to go into the shop.  So, as luxurious the “Land Rover” name is to us in America, it’s just another car here.  But it’s definitely a necessity to getting around the crater.

Ngorongoro Crater is lush with vegetation.  The roads are steep, windy, and muddy, and we could easily understand why the Kiboko Bus-Truck couldn’t come.  When we finally got to the top and stopped at a viewpoint of the interior of the crater, we were amazed.  It’s absolutely HUGE!  Isaac (our guide) pointed out some spots in on the floor of the crater as being buffalo.

Jon and me at Ngorongoro Crater

Our campsite is called “Simba A” and has a beautiful view over the crater.  It’s very grassy, and there’s evidence that wildlife visits often as we had to watch where we stepped.  There was a Marabou Stork walking around that was easily the size of my 4-year-old niece.

At 3:15 we descended into the Crater for a game drive.  The variety of vegetation is amazing.  As we got lower in altitude the grass got drier.  Isaac said that it’s a 600m descent, and that the Maasai take the cattle down the crater every morning for water, and bring the cattle back up 600m in the evening.  I’ll never complain about my commute ever again.  Ngorongoro, by the way, is named for the sound a cow bell makes.  The top of the Land rover pops up so we can stand in the truck and see all around us – no windows or obstructions – but we’re still protected by the doors of the truck.

We got back to the campsite and I took the coldest shower I’ve ever taken in my life.  This water definitely came straight from a very deep and cold well.  And I chose the shower where the shower-head didn’t work so I had to use the faucet.  When I came out of the shower, there were about 4 zebras walking through the campsite. 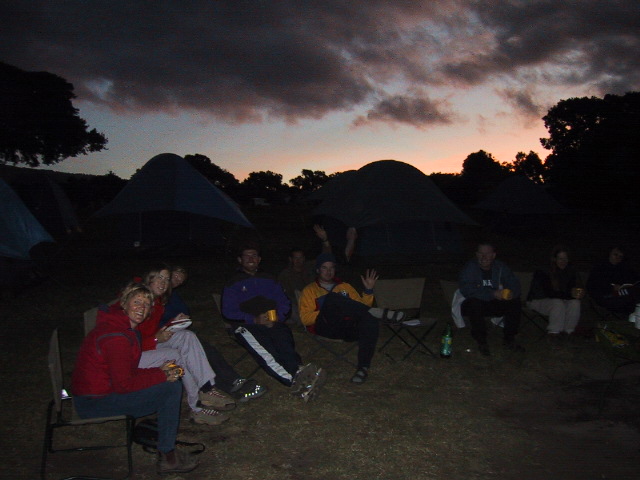 The gang at sunset

We had a delicious dinner of mushroom soup and chicken with rice. But there was no fire and we were freezing (remember that we were at 1700m elevation).  As it got darker, we got even warier of the animals that were on the perimeter on the campsite.  Kerry, Mathilde and I went to the bathroom together because of whatever was in the bushes.  Later, we were so cold that all 7 of us piled into Matt and Jason’s tent to stay warm and to watch the Aussie Video.  An hour later, Paul the Russian came to our tent to warn us that the bush pigs had entered our campsite and were devouring the rubbish bins.  So all 7 of us – all at once – clamored to get out of the tent to see.  We must have looked like some sort of cartoon as bodies came flying out of the tent, one on top of the other.  I didn’t get a good look at the bush pigs because I was laughing too hard, but they looked really ugly and very big.  I definitely don’t want to run into one in the middle of the night.

Jon walked me to the bathroom and then we went to bed because we were so cold.