Today is the last daylight trek we have.  We’ll arrive at Kibo Hut this evening – our last destination – where we will rest for a while and begin the summit ascent at midnight tonight.  We are very anxious!

I didn’t sleep well last night.  They say it’s a factor of the altitude: your body can’t get enough oxygen, so it’s especially difficult to sleep at these high altitudes.  But the weather was clear – we looked down on the clouds and it was all sunshine ahead, and the air had warmed considerably since we’d had breakfast.  So I felt happy and was ready to hit the road.  Before we left, we took a picture of our fun Horombo Hut-mates: 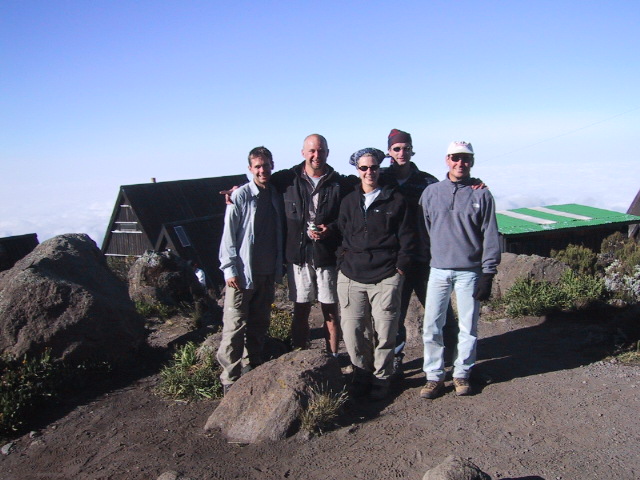 Bruno was MIA for the picture.

Today’s trek is through the Alpine desert, which is basically a vast wasteland of dust and shrubs.  The summit of Kili was in our sights every step of the way – very poetic!  We often passed people who were coming down from their ascent who wished us luck.  We were a very cheery bunch, and it was fun that we got to know many people last night.  We are now one big happy Kilimanjaro Family. 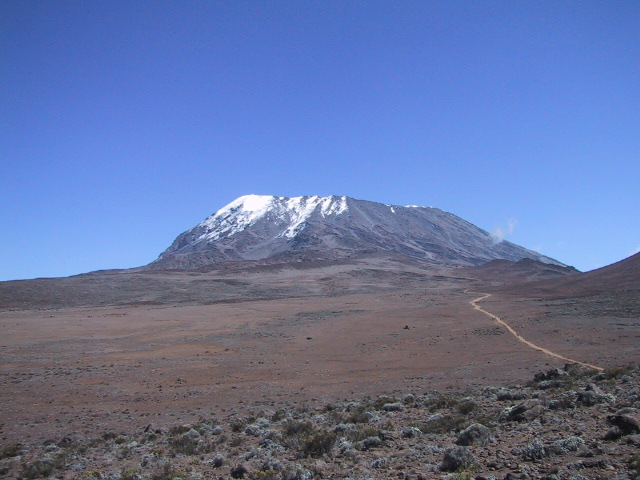 View of Kilimanjaro via the Alpine Desert

I started to get sick at the “last water point” about 2 hours into today’s 6 hour trek.  It started as a little headache, but I knew what it would turn into and was completely bummed that, despite my slow pace, the altitude was going to win.  The dizziness set in about an hour later and I was very unhappy.  Omari kept saying, “Don’t panic, DahDah.  You’ll make it.”  I wasn’t panicked, it was just that this was something I couldn’t control and couldn’t beat.

By lunchtime, I had a raging headache, dizziness, and nausea.  Jonathan felt sorry for me and gave me some Panadol (pain killers), Diamox (altitude sickness medicine), and some Quaker Chewies.  He said that that Diamox would take about 8 hours to kick in, but that was helpful seeing as our final ascent begins at midnight.  I told him he was my knight in shining armor.  Lunch was difficult, but Jon made me eat.  All I could do to hold it down because I didn’t want to waste the medicine I had taken.  I was so exhausted and sick that I couldn’t stop crying.  I wasn’t sobbing, I just couldn’t stop the tears from flowing.

So after lunch, I walked very slowly and tried not to stop very often.  I also tried to drink as much water as possible but it was difficult because I didn’t want to throw up either.  It was very windy, and the air was getting colder and colder.  Jon was doing just fine, and Andy was practically skipping up the mountain.  I didn’t have much to say.  I just wanted to get to Kibo Hut where I knew I could sleep for a while.

We arrived at around 3:30.  Kibo Hut is the final stop before the big ascent.  It’s literally at the base of the mountain at 4700 meters.  You’re only here for a few hours, so the hut is laid out into 5 rooms: 4 of them have 6 bunk beds, and one room is for dining.  Andy, Jon and I set up our sleeping bags in room #4 with Jonathan, 3 funny Brits, Eric from Chicago, a guy from Japan, a guy from Jonathan’s group, and Karen from England.  After getting settled, I went out to use the toilets (holes in the ground) and promptly got sick.  I thought – at the time – that I felt much better.  Little did I know that it was far from over.

The porters set out tea and biscuits for us, but I couldn’t do anything but sip warm water.  Then I threw up again and went to sleep for an hour.  Sleeping was difficult because it was SO COLD.  But my body was exhausted.  Jon woke me up at 5:00 because the porters had dinner ready.  So I went to toilet and got sick for the third time.  My head was killing me, I was dizzy, and I couldn’t stop trembling.  Jon insisted that I eat, though, because I needed some sort of sustenance. So I did, and somehow managed to control my stomach.  I also took another Diamox tablet.  We got into our sleeping bags and tried to sleep.  But we were all a bit anxious about tomorrow’s early morning trip.