Since we’d gone to bed last night at 7:30, I woke up this morning at about 5:30 and really couldn’t sleep for much longer.  Breakfast was at 7:30 – eggs and sausage and coffee and tea.  Again, the porters catered to us and it was a bit weird since we’re not used to being served like this.

We left Mandara Huts at 8:30 and exited the rain forest.  Basically, this means that – 20 minutes into our hike – we crossed a bridge and crossed into another world: the moorlands.  The moorlands are rolling hills of shrubbery and dirt, sort of boring but we had fun nonetheless.  Andy is very good company and is quite funny.  We stopped at a crater to look in, but we were anxious to get going so we didn’t stay for very long. 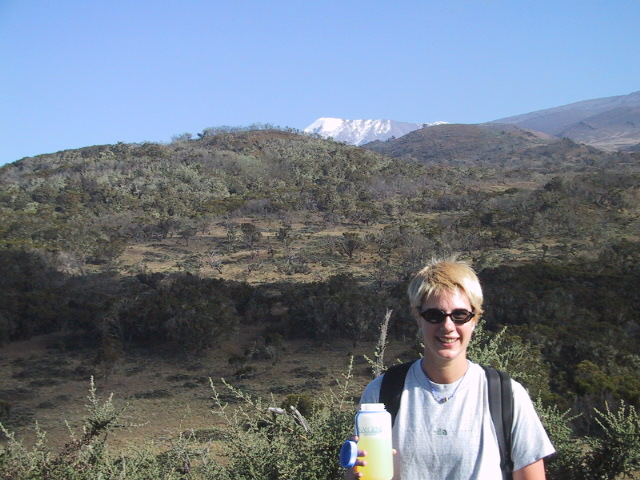 Taking a water break in front of Kili

Today, Omari taught me the numbers 6-10 in Swahili, which gave me something to concentrate on for a while:

So now I can count from 1-10 in Swahili.  That should come in handy (somewhere, I suppose).  The Swahili word for “sister” is “dahdah”, and Omari and the porters all call me that.  “Dahdah”.  It’s gotten to the point that I respond to it as if it’s my name.  I’ve decided that it’s an endearment and I like it!

At around 12:00, we trekked up a HUGE hill that took us about 45 minutes to get up.  We are still walking Pole!  Pole! and take a step about once very 2 seconds.  If we rush, our bodies won’t get used to the altitude and we’ll get sick – which nobody wants.  So the hill took us 45 minutes to get up as it was very steep and we went slowly.  Despite our slow pace, we were completely out of breath when we reached the top.  The altitude is definitely showing its affects on our bodies.  We’re out of breath very quickly, and – the higher we go – the longer it takes to catch our breath.  At the top of the hill was a spot for lunch and we were very happy to sit for a while.  Lunch was veggie sandwiches with butter, hard-boiled eggs, oranges, cheese, and biscuits.  Not very tasty, but we didn’t care.

We walked for about 6 hours today, and arrived at the Horombo Huts around 3:00ish.  We were completely filthy, as today’s trek was over dusty trails.  At one point on the trail, Jon laughed that I looked like the Peanut’s character “Pig Pen” because everywhere I walked a cloud of dust followed.

Horombo is at 3720 meters and is just above the cloud line.  It almost looks as if you can walk off the cliff and continue by walking over the clouds.  It’s the sort of view you get when you’re in an airplane and was quite amazing. 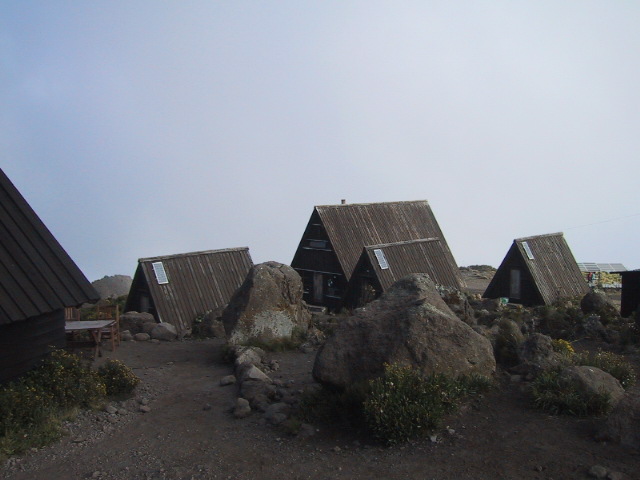 We checked in at the registration hut, and were sent to Hut #38.  The hut sleeps 6 people, and Andy, Jon and I are rooming with 3 other guys: Jonathan – a humorous Brit from Dubai, Bruno – a quiet guy from Italy, and John – a cool guy from Telluride, CO.  Me and the boys – the way it should be!

Horombo Huts is Kilimanjaro’s Grand Central.  It houses people going up multiple trails, people staying for a day of acclimation, and people coming down from the peak (or not from the peak).  So the dining hall was completely packed with trekkers who had various stories of success, illness, and injury.  “Kilimanjaro Lullabies” we called them.

The porters brought us hot water and we washed up.  My legs are completely filthy from the dusty trail, and I thought I’d never get the dirt off.  A shower would have been nice, but it’s entirely too cold to shower.  So we set up our sleeping bags, joked around with the guys, and went to have tea and biscuits in the dining hall.  Jonathan said he had some cards, so we collected him and sat at a table and played a game called “Cheat” where you bluff your way out of cards.  Needless to say, I lost almost every round – much to the guys’ delight.  The funny thing is that the cards themselves were pathetic.  Jonathan says he bought them in Arusha for $.25.  They were so thin that it was like playing with toilet paper!  Shuffling and dealing took forever because they were so hard to control.  So funny!

Jonathan is part of a group of 25 from Dubai who are trekking to the peak for charity.  He says that some of the people are cool, but that there are a lot of “stiffs” who are a bit picky about their camping arrangements.  Believe me, there is no room for high-maintenance people on this mountain!  Anyway, the group is sponsored by Estee Lauder and they have some very cool jackets – so at least they look good!  The interesting thing about their group is that – for a group of 25 – they have 50 porters and 2 guides!  The guide’s name is Emmanuelle and is something of a legend among the guides and porters.  He is 73 and has been to the summit 5000 times!  How about that for a repetitive job?

Jonathan is writing a book.  He is going to climb the “seven summits” – one on every continent.  Kili is his first expedition.  The seven summits are going to take him over the next 3 years, so we’ll have to wait for a while but I think it should be an amazing thing to read.  Even more exciting that we know the author!

Dinner was a chaotic nightmare.  Apparently, Horombo is more crowded than usual, and there’s no room to seat absolutely everyone at dinner time.  So the porters mill about looking for a space where they can set up their clients’ dinners, and we (the clients) wait anxiously for dinner so we can go to bed.  Our porters finally snagged us seats next to a large group from the Netherlands who had just descended from the peak.  They said that 15 of their group of 17 made it to the peak and – although they all vomited multiple times – they made it successfully.  So now we have some expectation of what to expect tomorrow night, and we even have some hope that we can do it too!

We were in bed by 8:00 that night, after hanging out in our hut and chatting.  Pretty funny to say “Goodnight Johns” and have half the hut say good night back.  Of course, I had to go to the toilet an hour later because of all the water I’ve been drinking.  It’s so hard to get out of the sleeping bag because it’s SO COLD up here!