We spent the morning packing up the car and saying good-bye to Ed and Jane.  Yesterday’s massive rain storm had an unfortunate result: somehow, the entire driver’s side carpet of the car is soaking wet.  It doesn’t appear that there was a leak, because nothing else in the car is wet (seats, walls, etc are all dry).  So somehow the water leaked up from below.  Jon thinks it’s because of a missing plug on the bottom of the body on the driver’s side.  Either way, the stuff we had on the floor (camera and a few books) are soaked.  This made Jon very, very unhappy and he spent a good hour trying to dry out the car.

Then we hit the road and drove as far east as we could in a day.  As we passed through Wisconsin, however, we made a point to stop by a cheese factory since we didn’t stop last time through.  As we got off the freeway, I pointed out an interesting site to Jon and he insisted that we stop for pictures. 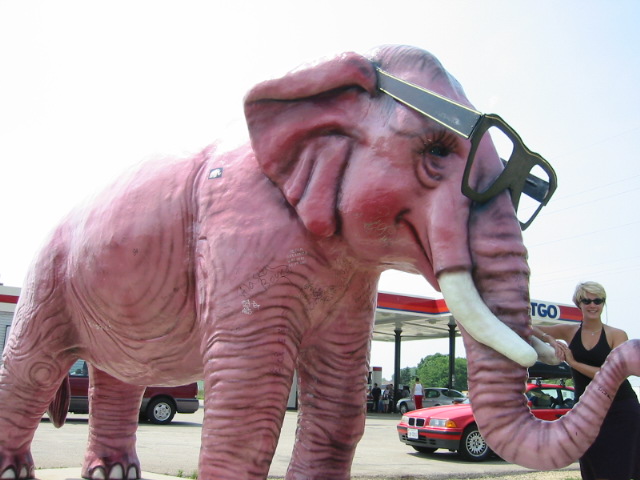 Then we drove the extra block or so to the Cheese Chalet.  This must be the town of bizarre statues, because there was a massive cow out front of the Chalet.  Jon, of course, made me pose in various hysterical places around the cow – which you can well imagine. 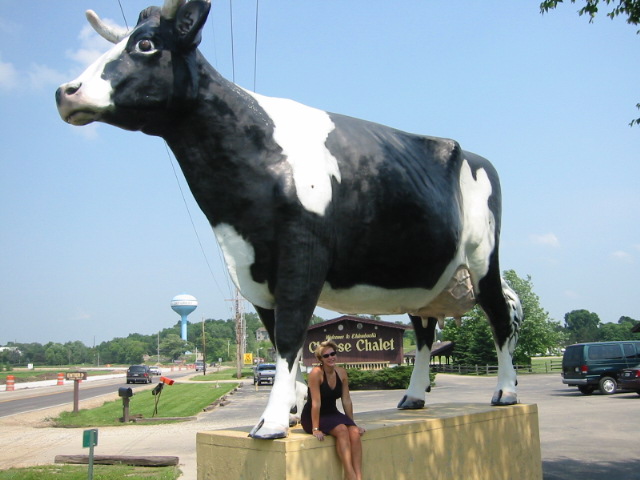 The Cow At the Cheese Chalet

The cheese tasting was very good, especially because I love cheese.  We bought a Dill Havarti, a Four-Year Cheddar, and some Aged Gouda for my parents.  Then we hit the road again.

Jon and I woke up this morning to go for runs, but instead woke up feeling very ill.  We both had swollen glands, were achy and sniffling and all-around icky.  Jon said that he figured that something like this would happen.  This past week was jam packed with activity and little sleep, and the night before last was really tiring.  He said that this was to be expected.  So we spent the day – my one and only day in Chicago – in bed.  We just couldn’t motivate ourselves to go out and do anything cultural.

And it was a good day to lay around too.  The day was overcast and rainy, so it wasn’t difficult to convince ourselves that our time would be better spent inside.

For dinner, we actually did motivate outside though.  My friend Eddie Barker is in town on a consulting contract.  Eddie married my former roommate and bridesmaid, Yoon.  He also, ironically, went to NYU Stern School of Business and is working for my soon-to-be employer, AT Kearney.  Actually, Eddie is one of the many reasons I decided to accept the job with ATK.  So it was nice to be able to see him and hang out. 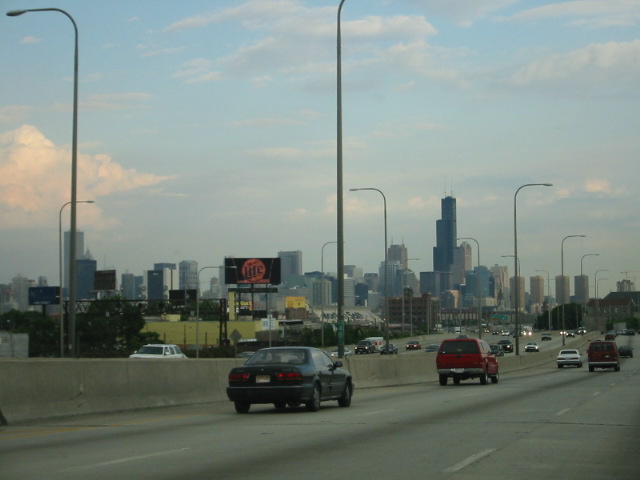 We met him “downtown” at a cool restaurant called Mas (www.masrestaurant.com).  We had a great time at dinner and spent most of the time talking about our trip, Yoon, and Eddie’s project.  We also learned a lot about the status of the consulting industry and the state of the company I’m going to work for.  ATK told me, after they last postponed my start date from July to some nebulous “soon”, that I could find another employer and they wouldn’t penalize me for the signing bonus I spent a year and a half ago.  But I don’t want to find another job.  I want to work for AT Kearney!  And spending the evening with Eddie reminded me why this is.  I want to work with intelligent, motivated people.  I want to work on interesting projects that will change every few months.  I’m ready for this.  And Jon and I both agreed after dinner that we’re ready to return to the real world and to concentrate on our careers again.

Now, if only we could find a way to do that!

Jon rallied us up and out of bed really early this morning.  He wanted to make it to Chicago by 10:45 for the 1:00 Chicago Cubs – Chicago White Sox game.  We were on the road for almost four hours, but we made it to Wrigley Field in perfect time.

How We Got the Tickets…

Originally, we weren’t planning to come to Chicago.  Our friends Mike and Lynn from San Diego were in Chi-town for the weekend, but we didn’t think the timing would work out for us.  But an intriguing (and slightly random) connection got us here.  When we stayed with Bridget and Terry in Kansas City, we mentioned that we weren’t going to Chicago and Jon said something about but not being able to get tickets to Wrigley Field.  Bridget and Terry said, “Well, Billy can get you tickets!”.  Huh?  Billy who?

Billy is Terry’s very best friend and was the best man at their wedding.  He’s also (small, small world) the third baseman for the Chicago Cubs!!!  Uuuuuuuhhhh…. excuse me?  Are you joking?!?!?  That alone is reason to go to Chicago!  Just for the story!  So Billy Mueller (pronounced “Miller”) secured us five highly coveted tickets to today’s inter-league game and we were so psyched about it.

We met Mike and Lynn and Jon’s friend Steve Lieberman at the main entrance of Wrigley Field.  We wanted to get into the ballpark when the Cubs were at batting practice so we could find Billy and say hello and thanks for the tickets. 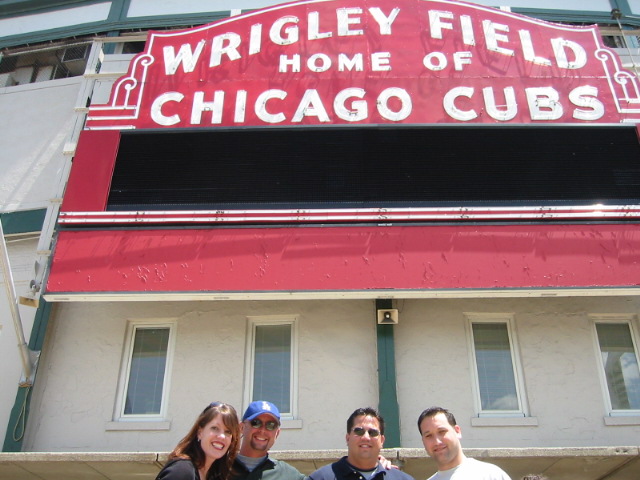 Unfortunately, the player tickets hadn’t been sent down to Will Call yet, so we instead went to a nearby bar where ESPN was hosting a brunch.  Steve works for ESPN, so he knew the place to go!  We hung out there for a while and then made our way back to Wrigley Field.

Jon, Mike and I went down near third base to see if we could catch a glimpse of Billy Mueller but the Cubs had long since finished their batting practice.  So we stuck around for a while but since the seats were filling up so we went back to our own seats.  Later, we saw Billy come out on the field to stretch and warm up, so we headed down again to find him.  As soon as we made it down to third base (no small feat in this sold-out stadium), Billy ducked back into the dugout.  So we never got a chance to thank him for the tickets.

Our seats, by the way, were spectacular.  Bridget and Terry warned us that the players’ seats are never the best.  Baseball is, after all, still a business and the players are employees.  So the best seats will naturally be used for revenue and not for the players’ benefit.  But our seats were great!  We were high up in the first section, in the shade, with a perfectly symmetrical view of the field. 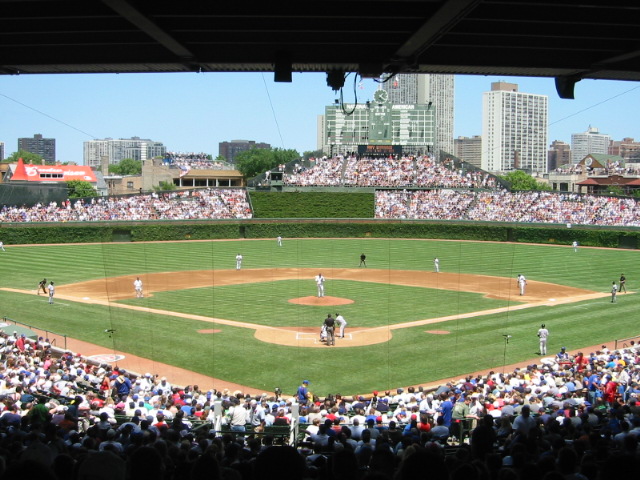 Our View of Wrigley Field

In fact, we’d have been happy with the “rooftop seats” outside the stadium.  The people who own the buildings around Wrigley Field have built bleachers on top of their roofs for seating and revenue.  How funny is that?  There’s the price for having a ballpark in the middle of a bustling city. 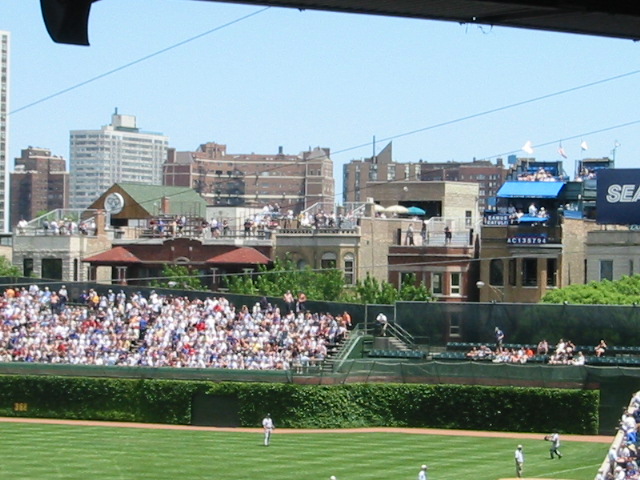 Anytime Billy came up to bat, we cheered like crazy.  I have no idea if he heard us, but I’d like to think that it helped a bit.  He was batting .228 and was 1-4 with a walk and a run scored. 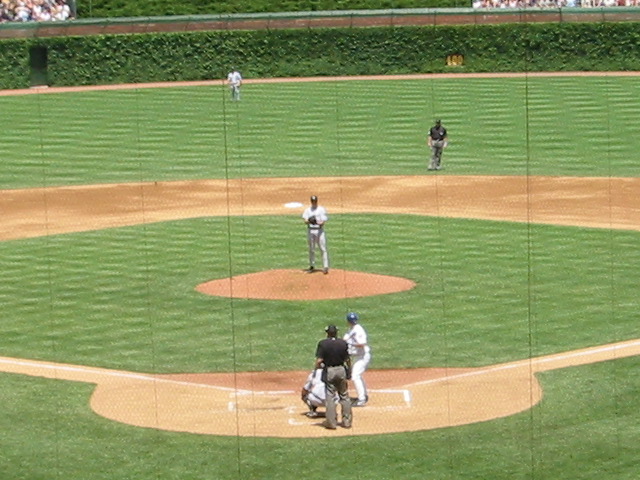 Did I mention that our tickets were given to us by Billy Mueller, third baseman of the Chicago Cubs?

The Cubs lost to the White Sox 10-6, and the crowd was absolutely nutty the entire game.  It was a surprisingly even split between Cubs fans and White Sox fans, but all were equally fanatical about their teams winning this game.  What a great way to spend a beautiful father’s day.  At an exciting and energetic baseball game.  Does life get better than this?

Only if your tickets are courtesy of Billy Mueller, third baseman of the Chicago Cubs.

After the game was over, we said good-bye to Lynn and Mike who had a flight to catch back to San Diego.  Steve went with them because their luggage was at his apartment.  Jon and I went down to the Cubs’ dugout to try to see Billy again, but that was highly unlikely because we knew he had a radio interview to do after the game.  It’s all good, though.  One really can’t complain about hanging out in an empty Wrigley Field.  Well, except the security guards who eventually came and shooed us out.

We got in our car and headed to our hotel, which was about 30 minutes outside the city.  45 minutes with the heinous Sunday evening traffic.  The hotel, it turns out, is just near O’Hare airport but we didn’t notice any air traffic when we later settled in to sleep.