Coiba Island is not an easy place to get to. After traveling all day yesterday, we met a bus outside our hotel at 7:00AM and, with the rest of our Coiba Dive Expeditions passengers, drove three and a half hours along the southern coast of Panama until we reached Puerto Mutis, one of two inlet access points to Coiba Island. There we found a dirt parking lot, a few dingy waterside restaurants, and a small, rickety pier where the two pangas (skiffs, dinghies, or otherwise depending on the country you’re in) waited for us. The inlets in Panama are so shallow – especially at low tide – that the dive boat can’t get into to them, so the pangas are used to make the trip instead. Because we were at super-mega-low tide, it would be a 50-minute trip from Puerto Mutis to the Yemaya II. 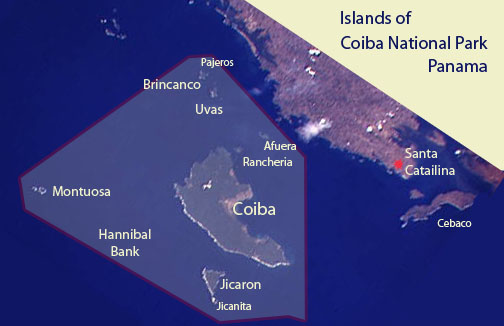 As dreadful as 50-minute panga ride sounded after we’d spent hours on a bumpy bus, the ride was simply stunning. The route took us down gentle canals bordered on either side by trees and coastline, almost entirely unpopulated. Kevan, one of our Dive Masters, explained that this area is so remote that most of the people who live here survive entirely off the land. Me and E, courtesy of James Moskito’s sunglasses
Photo by Eric Cheng

It’s unbelievable that in this day and age of overly-constructed coastline any place like Panama exists. But given the roads we drove down to get to the inlet I suppose I can understand the lack of development; there’s simply no infrastructure to actually get there. And I’m hardly complaining; the ride through this remote area was the perfect transition from civilization to nature. I left all my thoughts of work and the world at the tiny little pier. Yemaya II and Dolphin Send-Off
The MV Yemaya II is a beautiful, newly-refurbished boat that sat just outside the canal system in a calm, blue and green bay. The staff greeted us with iced tea and fruit, and Otmar – the dive operator – ushered us on a tour of the boat as we pulled anchor and began the four-hour trip to Coiba Island. En route to Coiba with pangas in our wake Diving with the good stuff Otmar’s tour was briefly interrupted by a send-off by a huge dolphin playing in the wake of the bow, and we all gathered up front with cameras ready. Dolphin hopping through the wake Checkout Dive – Iglesia
Our first dive – a checkout dive – was at “Iglesia”or “The Church”. Apparently this is named because, at night, you can see the Southern Cross over it and it looks like a church. The site was rocky with some coral and about 4-5 white tip. White tip – We call white-tips “sharks”, because they’re more like cats and not the sharks we’d really like to see. E’s pic of a “shark”
Photo by Eric Cheng

My dive habits needed adjustment to support some of my new gear, so this easy check-out dive was the perfect test run. I had a new BCD, new boots, new gloves, and an odd camera configuration since I couldn’t find the right strap at home. The new gloves are Waterproof’s “three fingered mitten” which means I have a thumb, an index finger, and a big paw. (Eric calls these my “lobster claws”) I was pleasantly surprised that this finger configuration caused no difficulty operating my camera buttons, but was vastly amused at the unexpected issue that did come up. When I needed to signal to Ben, our Dive Master, that I was at half a tank of air (1500 psi), normally I would gesture with my fingers: 1 – 5 – 0 – 0. But with one thumb, one finger and a paw, it’s impossible to make the “5” signal. I cracked myself up underwater while Ben looked at me like I was crazy, but eventually he picked up the message.

I was also using Eric’s Oceanic computer with integrated air, so I had removed my pressure gauge in favor of his air pressure transmitter. He uses this computer as a backup to his Uwatec, and we’ve been talking for a year about me getting him a low-key backup and him giving me this one. I LOVE IT. What a wonderful feeling to look at your wrist and know not only the depth and time of a dive but also the amount of air you have in the tank *and* the approximation for how many minutes of air left. I still had my Suunto computer on my BC strap, but this air-integration feature changes everything. It’s brilliant. I’ll never go back.

* Translation of previous paragraph on request on the non-divers: *
We dive with dive computers that look like really big watches. These computers track our depth, time, water temperature, and time between dives, and some computers (not my ancient “Suunto” computer) have a thingy you plug into your tank that reads your remaining air levels. This way you don’t have to look at the tank attachment… only the watch on your wrist. It’s really cool. So I borrowed Eric’s Oceanic computer that has this cool “air level” feature. But I kept my old Suunto on my scuba gear so I had *two* computers.
* End translation *

We emerged to a brilliant sunset over the islands and I indulged myself with a watery picture of my fin: Sunset from the water
Sunburned Dinner
Dinner that night was the lobster we’d played with before – cooked on the grill by Juan Carlos, the Yemaya’s friendly chef. I belated realized that I’d been sunburned from the morning’s gorgeous panga commute even though I spent the entire ride in the shade. Obviously I hadn’t accounted for the reflection of the sun off the water (how quickly I forget lesson learned years ago). My arms had an attractive farmer’s tan and my chest a v-neck shape. Grrrr.

Dinner was interesting since Eric and I were the only Americans along with James – whom Eric knows. There were two Brazilians: Marcelo and Kadu. Five French: Frederick, Louis Michel, Laetitia, Maëlle, and Pierre. Jesus the Spaniard, Andrea the Italian, and Jono the Australian. The group is a fun, boisterous one and the dinner table was full of conversations in Spanish, French, Italian, and Portuguese. I was reminded again that I need to take language classes; my French is barely passable anymore and my Spanish is non-existent. And since we all (and my fellow divers) speak in the languages that are easiest to us, I had little to contribute to the conversations since I couldn’t understand what was being discussed. This was a shame as I love meeting new people, but the language differences – and my minority as an English-speaker – made it impossible for me to do anything but smile and nod.

Coiba Nightlife
While Eric and I sat at the edge of the boat we heard a loud “splash” in the water, followed by another, then another, and another. The fish nightlife is fairly active in this area, with flying fish skimming the surface and other fish being chased out of the water by bigger fish looking for their dinner. The entire dance made a wonderful backdrop to a quiet evening out in the middle of nowhere, Panama.