I woke up this morning to the sounds of bubbling water.  The stream that runs next to the campsite and directly behind our tent was very active and was steaming with a vengeance.

The last half of the day yesterday, Jon and I both had horrible headaches which we figured were from our morning adrenaline rush.  But last night, Jon’s got very bad and actually kept him awake for part of the night.  This is notable because a nuclear war wouldn’t keep Jon awake at night.  So I was actually pretty worried about him.  He still had a powerful headache this morning when we woke up at 6:30, so we decided to change our plans and stay here an extra night.  While Jon slept, I called the skydive place and rescheduled for tomorrow instead.  I also paid for one extra day at the Cozy Cottage campsite so we wouldn’t have to dismantle the tent by 10:00.

Then I went back to the tent and read while Jon slept, and around 9:00 I got up to make some breakfast.  While I was chopping the veggies, Jon showed up looking much happier although with puffy eyes.  We were quite happy to have an easy day to relax and sightsee, because Rotorua is actually a lovely little town.

We went to the Kiakua Park which was right around the corner from the Cozy Cottage campsite and has a whole slew of thermal activity.  The park is separated into little sections of steaming ponds, lakes, and mud pits.  The sign basically said “Please stay on the marked paths because thermal activity is unpredictable.”  Obviously because most of the ‘marked paths’ were blocked off by newly-erected fences.  The woman at the Cozy Cottage told us that a “blow-out” happened as recently as October. 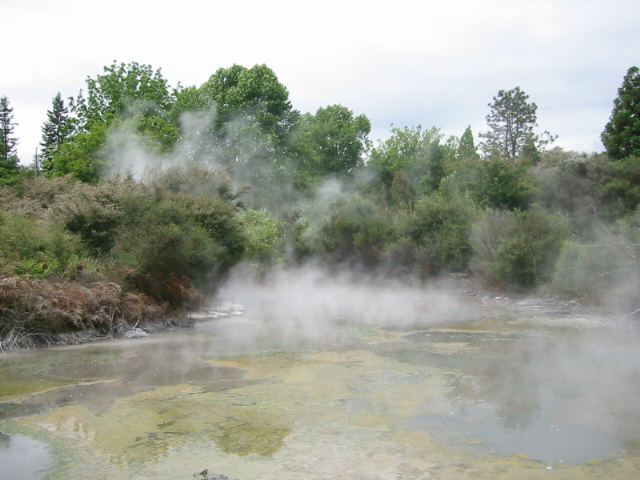 We walked around and looked at the different effects of the thermals.  The entire place smelled of sulfur and steam and was so interesting!  In the 1930s, locals would swim here in the mornings and evenings.  Pretty funny, considering that everything’s now blocked off from public access.  Some of them were steaming fiercely, but others only slightly so.  Most of the water was incredibly clear, and we touched one of the smaller ponds.  It wasn’t scalding hot but I definitely wasn’t going to jump in any time soon. 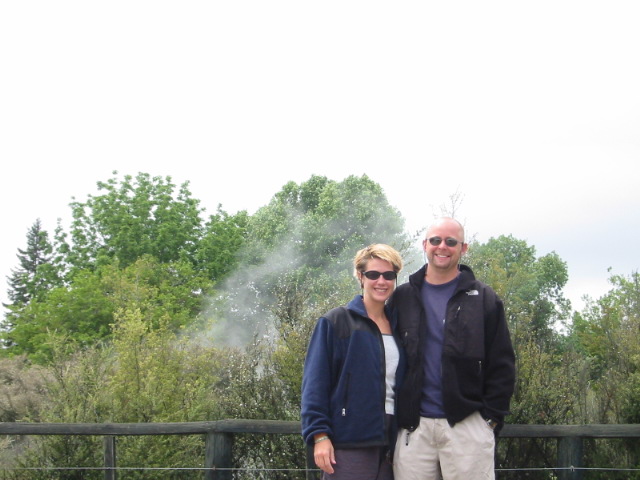 We found the place where the October blowout happened.  The entire area was covered in light-colored mud and surrounded by a temporary fence.  The trees in the area looked like they had been smothered in mud.  Where the rest of the park was green and blooming, these trees had been scalded and mud-covered.  The contrast was definitely intriguing.

We spent a few hours walking around the thermals and then got back in the car to run some errands.  We walked around town and wandered into a sports store and FINALLY found Jon an new pair of Tevas.  He’s been wearing his every day for 6 months and boy do they look like it.  We’ve looked for Tevas for him since August, but the people in Asia just looked at his feet and laughed because no one carried his size.  Thank God for a western country!  We also found a tape adapter for the car, so now we can hook up the laptop and MP3 players to play music in the car until the batteries wear out.  (Our car radio, by the way, only spans the frequencies from 88.0 – 90.0 for some reason, so we rarely get radio stations)

We went back to the campsite and had lunch on the picnic bench outside our tent.  I finished off the tuna and Jon had hummus and pitas.  Then we did laundry and worked on the journal entries.  That was pretty much our day.  Nothing too exciting.  It began to rain in the afternoon and didn’t really stop for the entire evening.

For dinner, we grilled some meat and made psuedo-steak sandwiches with mushrooms, onions, peppers and cheese.  I love having a grill again!  After dinner, we drove into town to use the super-fast internet cafe again and had some ice cream for dessert.  The rain was coming down pretty hard by this time, so we just wanted to get back to the campsite and sit in the hot-springs-hot-tub.

To get out of the rain and cold, we grabbed our bathing suits and headed to the hot springs gazebo.  Here, we sat in the hot tub and chatted with a couple from Australia who gave us pointers about the South Island.  They had some lovely recommendations and – although we couldn’t get a word in edgewise – it was nice to hear some ideas from fellow campers.  Then a woman came into the gazebo with her screaming granddaughter.  The baby was upset because her Mummy wasn’t with her, but even when Mum showed up and got into the water the child still cried and cried.

This was our cue to leave.  Babies are great and all, but not in a hot tub where other people are relaxing.  So we both made excuses and walked to the bathrooms to shower and get ready for bed.

Rain Test for the Tent

It was pouring rain by the time we got into the tent.  This was going to be the big test: how would our new tent hold up in wet weather?  It seemed fine as Jon and I lay there for a while and read books with our flashlights.  No leaking from the top.  There is a seam in the floor of the tent that was leaking a tad, but nothing to be concerned about.

Then, for whatever reason, I shifted my shower kit from one of the corners.  I was soaked.  Underneath it were my pants and sweater – all soaked.  When we lifted them up, we found that a monstrous puddle was forming in the corner of the tent beneath my sleeping bag.  (We were on a slight hill, with me on the downhill side).  We scrambled for something to soak up the water and I ended up going out to the car to get our dirty clothes to use as towels.  As I did that, Jon tried to find out the source of the leak.  Obviously, the seam in the floor was letting in water – but why so much?  We checked the rain cover for the tent, the seams of the tent, and the ground tarp underneath the tent.  It turns out that it was the latter that was causing the problem.

Long story short: part of the tarp was sticking out from under the tent and was acting as a gutter.  The rain cover was channeling the water right onto the tarp, which was then funneling the water under the tent.  Here, it was pooling up in a depression in the ground beneath my sleeping bag.  We squeejieed out as much water as we could and folded the tarp under so it was protecting the bottom of the tent without sticking out.  The funny thing is that we remember Brendon (our Africa guide) telling us about this problem, but since it never rained while we were there this fact just slipped our mind.

Good thing, too.  Because it POURED all night long.  And aside from this little glitch, the tent held up just fine!