Today we slept in until late, packed up our stuff, and switched hotels.  The Kathmandu Hotel (where we stayed the first few days here in Kathmandu) was about 2 blocks away from the Hotel Harati, where Intrepid had us staying.  So we piled on our backpacks and headed down the street.

At the Kathmandu Prince, Rammani was very happy to see us again.  He told us that – since we had been “trekking” in Tibet – he would give us a room with a bathtub.  A real treat!  So we put our stuff in the room and essentially moved in since we’ll be here for 4 days.  The waist support of my backpack is ripping because of too many hotel porters picking it up incorrectly.  So I took everything out of it and will take it to one of the mountain trekking stores to have it fixed.  We also gave the hotel our massive pile of laundry with our sleeping bag sheets and are so excited to have stuff washed.

We headed into Thamel to buy some souvenirs and do some Christmas shopping which we will send home and which will hopefully make it there by December.  I’m not going into detail about where we went and what we got (duh!  Then they won’t be surprises!), but we spent all day shopping and got lots of cool stuff.

We had lunch at a great restaurant called “Fire and Ice” which serves pizza and ice cream.  Jon and I split the biggest calzone I have ever seen.  It was also one of the most delicious I’ve ever had!  We debated whether it was as good as those at Luigi’s in Harrisonburg, VA.  I think it is, but Jon thinks I’m having Luigi’s withdrawls.  So we decided that – next time we’re visiting family in DC – we’ll drive the two hours to Luigi’s for lunch so we can determine if it’s as good as we remember.  I wonder when that will be.

While we were in Tibet, we overdosed on noodle soup.  It seemed that noodle soup is all Tibetans eat!  Or at least that’s the safest thing to order in most restaurants.  At one point a few days ago, we were waiting for the group to meet to go to dinner and Jon had a  “If-I-Have-To-Eat-Another-Noodle-Soup-I’m-Going-To-Explode” look on his face.  I’m sure you know that look.  So I gave him something to look forward to and said, “When we get back to Kathmandu, we’re going to go to Yin Yang and have the spicy prawn appetizer, I’m going to have the Chicken Massuman, and you’re going to have the Green Curry Beef.”  This made the millions of noodle soups a bit more bearable.

So we made plans to meet Mark and Laura at 7:30 at Yin Yang for dinner.  We arrived kind of early at 7:00, so Jon went to pick up my newly repaired backpack (on which they apparently broke 10 needles trying to fix it!) and I got us a table and some beers.  I was almost done with my beer when Mark and Laura showed up, and – having not consumed alcohol in a few weeks – I was feeling a little tipsy.  We had a lovely dinner with them and laughed the entire time. 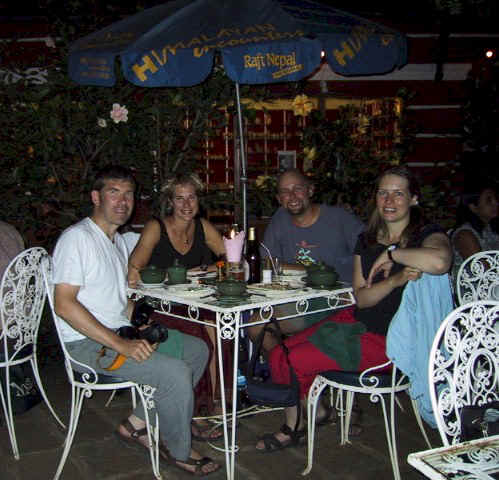 Mark, Me, Jon, and Laura at Yin Yang

I don’t know whose idea it was to order dessert, but none of us had eaten this much food in 2 weeks and we had to waddle back to our respective hotels.  We said good-night and told them we’d see them bright and early tomorrow morning for a white water rafting trip.