Today we slept in because we have to switch hotels to the place where Intrepid Travel arranged for us to stay.  We’re excited to meet up with another group tonight and to meet some new people.  We packed up our stuff and checked out of the Kathmandu Prince Hotel (where, by the way, Jon negotiated an AWESOME price for us when we get back from our trip).  It’s a nice little place and the staff is very nice.

We put on our backpacks and trekked a few blocks away to the Hotel Harati.  We dropped off our stuff, grabbed our books, and headed out to lunch.  We went to the Northfield Cafe in the Thamel district – a cute little courtyard back away from the street covered by a big blue tarp.  We ordered banana smoothies and nachos, and read our books.  Then we ordered lunch and read some more, and then ordered a scrumptious apple pie a la mode.  It started raining a bit, but we didn’t care because we were under the big blue tarp.

After lunch, we walked around more of Thamel, stopping in the backpacker stores to get fleece gloves and hats for Tibet (where we will be at/above 3500 meters).  We also picked up a little t-shirt I had made a few days before.  Then we went back to the hotel because we’d forgotten our computer disk to upload journal entries.

While we were back at the hotel, Kath – our Intrepid Travel Leader – stopped by to say hello and to get some paperwork we had for her.  She’s very cool, and we chatted about traveling and the Tibet trip for a while.  Then she left and Jon took the disk to the Internet Cafe while I lay around and read my book.  He also stopped by a grocery store for snacks and took my new t-shirt back to the store because they’d forgotten to sew part of it. (oops)  What a great guy to do all that while I lay around!

At 6:00, we went down to the hotel lobby to meet Kath and our new travel group.  There are about 12 of us, and we were surprised by the number of Americans in the group.  Kath briefed us on the trip (very cool), the accommodations (very sparse), and the high altitude (very high).  We also talked about Intrepid’s “Responsible Travel” mantra: don’t use too many plastic water bottles, don’t promote the begging, and respect the religious pilgrims – among other things.

Then we went to dinner at K-Too, a restaurant in Thamel.  We were quite a happy crowd, and there was a cool band playing in the bar so we were very content. 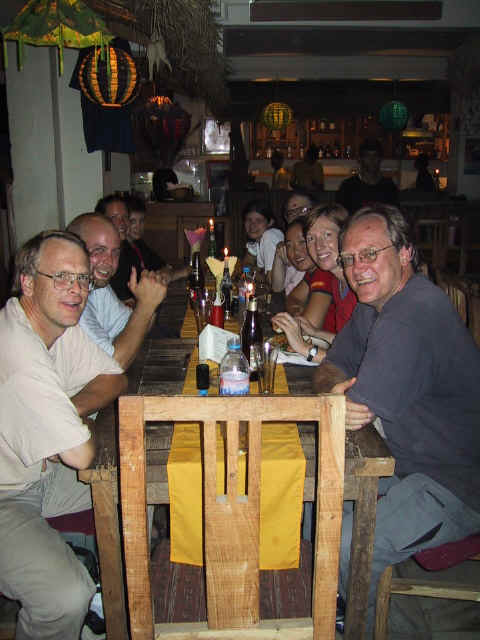 After a while, a group of 40 teenagers with matching shirts came in as well.  We wondered why any group would want matching shirts, but found out later that they had been together trekking for a month and tonight was their last night together.  So they were very sentimental and taking pictures of anyone who moved.  One of the kids got up, borrowed the band’s guitar, and sang a song which made the whole group teary-eyed.  I remember high school trips like that!

Anyway, here’s the low-down on our group from what we could gather over dinner:

Kath Our travel leader from New Zealand.  She loves China and Tibet and has been ALL OVER.

Susan From Potomac, Maryland but originally from Long Island.  She’s a fellow Wahoo so enough said.  We love her already.

Alex Young girl (20, I think) from Switzerland.  She’s been on the road for 7 weeks and speaks quite a few languages.

Lhasa From Australia, but currently lives in Japan.  She’d just arrived when we started our group meeting and was very happy for someone who had just ended a long plane ride.

John From Australia just North of Sydney.  He’s been to this area 4 times before – from Everest Base Camp to hanging out in Kathmandu.

Sid A doctor from Montana and is currently moving to Minnesota.  Very nice guy.

Lisa Originally from St Louis, but currently lives in Boulder, CO.  She’s spent some time in Africa, among other places and is traveling with her Dad.

Ken Lisa’s Dad from St. Louis although originally from Manhattan.  He works at Washington University doing medical research and is currently working on a very cool paper: the effects of distracted driving.

Gabrielle From Austria.  She didn’t come to dinner so we didn’t get to know her very well.

Laura and Mark They’re from the UK, but they hadn’t arrived by the time we went to dinner so we hope to meet them tomorrow.