We were up early to do a tour of the valley outside Kathmandu.  Our driver met us in the lobby at 8:00AM, and within 20 minutes we were driving in the green countryside on narrow mountain roads.  The scenery was stunning and the drive was very nice.

Dakshinkali is a temple dedicated to the goddess Kali, Shiva’s consort in “her most bloody incarnation”.  On Tuesdays and Saturdays Nepalis come here to sacrifice goats, roosters, ducks, sheep, and pigs to satisfy Kali’s blood lust.  We had to walk down a long drive and some steep stairs to get to the temple, which sits in the corner between two hills where two rivers meet.  It’s a lovely setting, and even though it’s basically a slaughterhouse, the entire experience is powerful.  The temple is very holy to local Nepalis, and we were not allowed into the Kali compound.  So we sat on a hill above the compound and watched the blessings and sacrifices.  I did manage to get a picture of a rooster just before it was given to Kali.  Good taste tells me I shouldn’t put the picture here, but Jon is insisting.

After the animals are sacrificed, the bodies go into a plastic bag and go home with the owners for dinner.

We also stopped by the nearby Sekh Narayan Temple, which has an interesting collection of temples, pools, and carvings.  The main temple is above the pools and is sheltered under a multi-colored, overhanging cliff.  It was interesting to see.

We drove through Chobar to the Jal Binayak Temple, which is just below the Chobar Gorge on the riverbank.  It’s one of the valley’s most important shrines dedicated to Ganesh.  It dates from 1602 although there was probably a temple here long before that.  Just above the temple a suspension bridge stretches from one side of the gorge to the other.  We went here first to enjoy the view before going down to the temple. 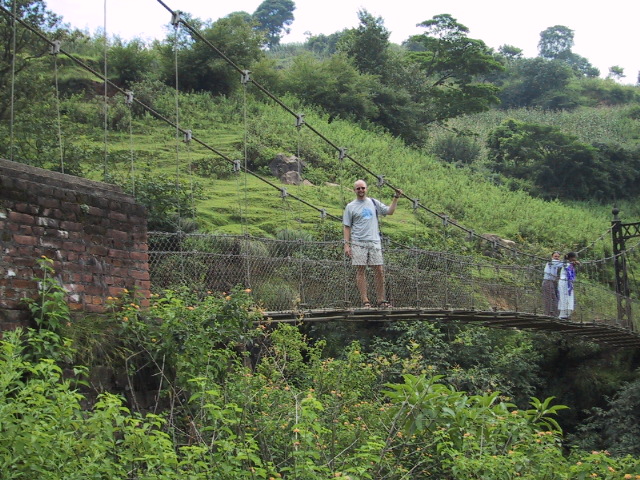 Jon on the suspension bridge 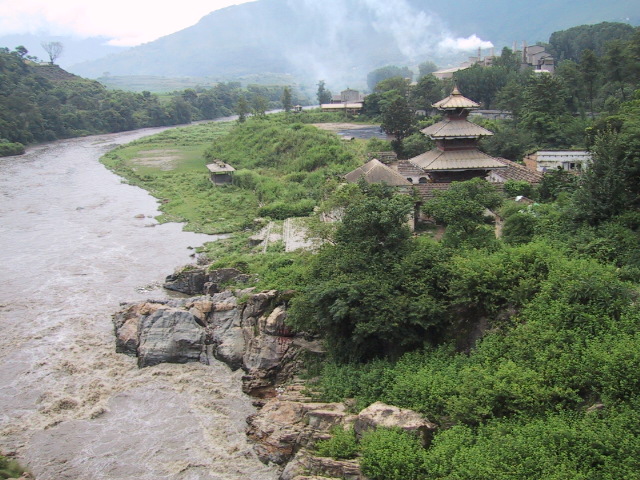 The driver then dropped us off in Patan, which is a town just outside of Kathmandu.  We especially wanted to go here today because today is Krishnasthami – the God Krishna’s Birthday – and there is a special festival in Patan today.  Krishan is an incarnation of Vishnu, who is an important Hindu God.  So we made our way to Durbar Square, where the festivities were taking place.

The place was PACKED.  They had roped off sections of the square where men and women were standing in line with flowers, oils, and gifts to put into Krishna Mandir (Krishna’s Temple). 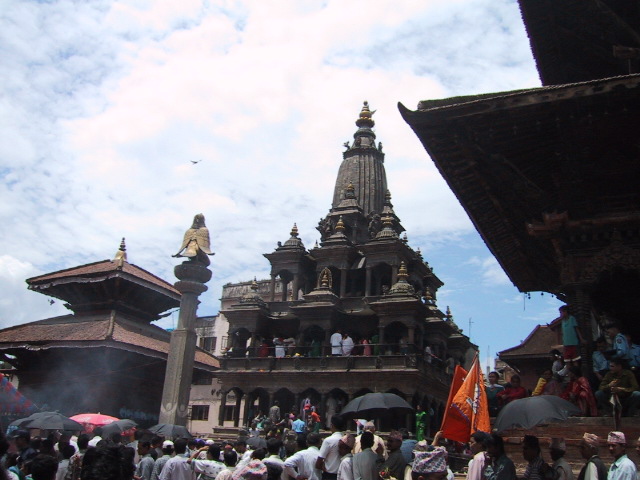 …built by King Siddhinarsingh Malla.  Records indicate that the temple was completed with installation of the image on the 1st floor in 1637.  With its strong Mughal influences, this stone temple is clearly of Indian design, unlike the nearby brick and timber, multi-roofed Nepali temples.  The 1st and 2nd floors are made up of a line of pavilions from the top of which rises a corncob-like shikhara.  Musicians can often e heard playing upstairs.

Krishna is an incarnation of Vishnu so the god’s vehicle, the manbird Garuda, kneels with folded arms on top of a column facing the temple.  The stone carvings along the beam above the first floor pillars recount events of Mahabharata while on the 2nd floor there are scenes from the Ramayan.  These fine friezes are accompanied by explanations in Newari of the narrative scenes.

We had lunch at Le Cafe Temple, which had a great 4th floor terrace where we could look out over the entire festival.  We ordered lunch and people-watched for a long time.  There was so much to see – Brahamans, dancers, worshippers, tourists.  It was all fabulous.

Tomorrow, we meet our tour group to go to Tibet.  We leave for Tibet on the 13th (I think), and I’d be surprised if Internet Cafes are abundant there.  So you may not hear from us until the end of August when we return to Kathmandu.  Either way, keep sending emails because we LOVE to get emails from you all!  And keep checking connal.com just in case we can get to a terminal somewhere along the way.