Not only was this day stunning, but it was also Culture on Crack. We woke up exceptionally early to catch an 8AM ferry ride to Colonia, Uruguay – which was unfortunately the only ferry time we could reserve yesterday but in hindsight was not such a bad thing since it dragged us early out of bed for what would be an exceptional day. The flight was uneventful and we arrived in Buenos Aires relatively on time and super hot since the weather was a muggy 90 degrees. We found Shannon in the hotel lobby – the Hotel Rochester – who told us the desk staff apparently had difficulties determining which room was which, so they encouraged us to “have a drink at the bar” while they sorted it all out. Slightly annoying since we wanted to shower off the airplane, but it gave us a chance to catch up and to plan the few hours we had for little sight-seeing and a bit of shopping.

END_OF_DOCUMENT_TOKEN_TO_BE_REPLACED

I took a few weeks and went traveling around London and France to see friends.  No journal write-ups, but loads of pictures here.

My third year of college, I lived in a big red house with 14 girls, 9 bedrooms, 2 bathrooms (yeah, you read that correctly), 1 rat, and – depending on who you speak with – one slightly quirky ghost. I didn’t know these girls well when we moved in that summer, but within a few months they taught me what having true friends was like… true friends love you for your quirks and craziness, as well as for your strengths. And we actually relish (and perhaps feed off of) each others’ quirks and craziness.

END_OF_DOCUMENT_TOKEN_TO_BE_REPLACED

Today we had a day off together, and decided to venture out to the Atherton Tablelands for some exploring.  Before heading out, however, I made an early run to the grocery store for our lunch and whatnot.

I was back by 9:30, and we packed up the car and headed south on Bruce Highway to Babinda.

Our first stop was only about an hour to an hour and a half south of Cairns.  The Babinda Boulders is a creek/swimming hole that’s a favorite with the locals.  It was pretty quaint and not very crowded, so we were quite happy to be there on a weekday.  We followed an “eco-path” for a while, but quickly got bored and went back to the swimming hole for a dip.

This is apparently a place of spiritual significance for the Aboriginal people.  Here’s the legend, which I copied off the ‘Net: “According to the legend a very beautiful girl from the Yidinji people named Oolana married an old and respected elder from her tribe named Waroonoo. Some time after their marriage another tribe arrived in the area. In this group was a handsome young man named Dyga. The moment Oolana and Dyga saw each other they fell in love. Realizing the crime they were committing, the young lovers fled into the valleys, pursued by both tribes. When they were finally captured, Oolana broke free from her captors and threw herself into the still waters of the nearby creek, calling for Dyga to follow her. As she hit the waters, her cries for her lost lover turned to rushing water and the land shook with sorrow. Huge boulders were thrown up and the crying Oolana disappeared amongst them. It is said that her spirit still guards the boulders and that her cries can be heard, calling for her lost lover, and luring young men into the dangerous waters.” 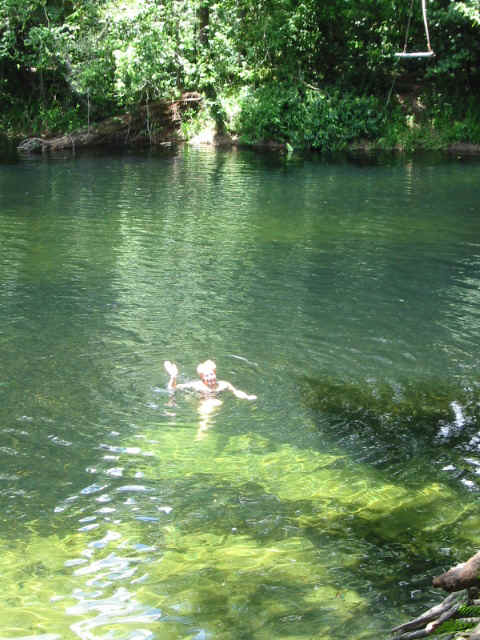 Heidi in the Babinda Boulder Creek

Well, we didn’t hear Oolana crying, but we were definitely lured into the lovely swimming hole.  The water was nice and cool – much different from the warm ocean water we’ve been swimming in.  So it was a very refreshing swim.  There was also a swing hanging from a tree, so – naturally – Jon practiced his acrobats.  I caught it on video, but our 56K modem connection is too slow to upload.  Sorry!

After the boulders, we dried off and headed to Josephine Falls in Miriwinni.  Here, we parked the truck in the parking lot and had lunch at a picnic table out front.  Pita, hummus, and tomatoes with basil and olive oil.  Yummy.

We sat and watched as two other trucks drove up and some young guys piled out and ran happily down the path to the falls.  Then we watched as another truck drove up and two other guys got out and proceeded to toilet paper one of the previous trucks.  They snickered the entire time, and made sure they depleted the entire two rolls of toilet paper before they were done.  Then they hung the empty rolls on the antennae and followed their friends down the path.  But they winked at us before they left.  Australians really do have wonderful sense of humors.  And they’re such pranksters!

After lunch, we also headed down the path to the falls.  The group of guys were there and having a glorious time.  Obviously, a few of them were celebrating blissful ignorance since they didn’t know what waited for them in the parking lot.

Anyway, the falls weren’t huge, but the water trickles down a few different levels of boulders and into a nice-sized swimming pool.  Before it gets to the swimming pool, however, the water has spent the past many years smoothing over a massive rock and has created a natural water slide into the swimming pool.  This is what everyone was enjoying when we arrived.  There were about 20 people (men, boys, women, girls) slipping and sliding up the rock so they could sit in the water flow and slide right back down again.  It was fun to watch, and it wasn’t long before Jon and I were slipping and sliding up the rock with them. 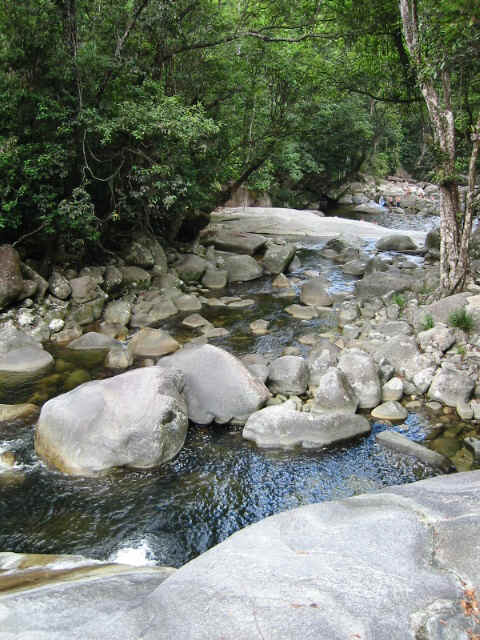 Josephine Falls – the water slide is further down the falls

I’ve realized that I’m getting old.  Some of these kids were walking directly up the water slide to get to the top.  Me… well… it was hard enough taking the DRY way up the rock without falling and killing myself.  So I’ve turned into one of those “safe adults” that used to drive me crazy.  But now, I’m more concerned about breaking bones and whatnot.  And I did scrape up my back a bit on the first slide down!

And here’s a really gross thing.  Jon and I were sitting on one of the side boulders, trying to decide if we should stay or go after an hour of goofing around.  I looked down for some reason and saw something between two of my toes.  (Look, I told you this was gross, right?)  It looked like a snail so, partially grossed out, I flicked it away.

And it didn’t flick away.  It was stuck to my toe.

I managed to pull it off and frantically tossed it into the water.  My toe was already bleeding and I looked up at Jon and said, “I’m ready to go now!”  Without telling him what had happened, I grabbed my stuff and was far away from the water within 5 seconds.  When Jon reached me, I pointed to my obviously bleeding toe and tried not to shiver in disgust as I told him about it.  He gave me a typical guy version of sympathy, which was something along the lines of “Well of course there are leeches in there!”.  I equated this situation to the ant attack in Africa and told him that I needed a bit more sympathy and compassion.  So we made our ways up the path and went into the public restrooms to – as Jon put it – “search all our nooks and crannies”.

Yeah.  ‘Cause I don’t want ANY leeches in my nooks OR my crannies.

After Josephine Falls, it was we were going to head to another set of falls which I was ready to look at but not to swim in.  But before we even got there, Jon was distracted by an uphill dirt road in Milla Milla in the Wooroonooroo State Park, off Route 25.  It had a gate which was open, and of course Jon considered this a sign from God that it was time to put the four wheel drive in action. 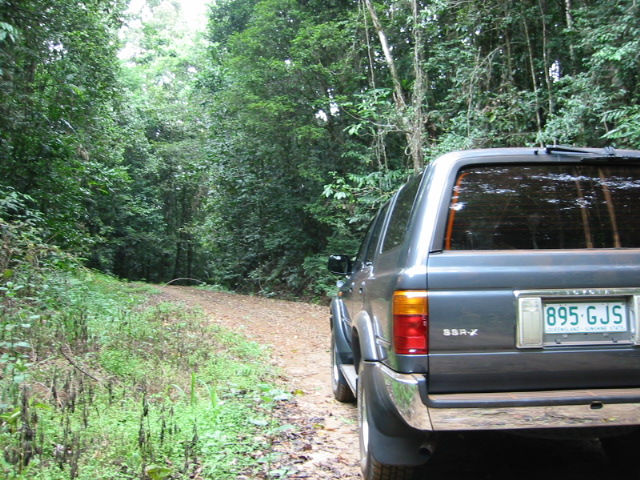 The Dirt Road.  To Jon, it was paved in gold!

So we drove.  And bumped.  And bounced.  And jarred our way up and around this road.  The road ended up being a state park road which lead to nowhere and just kept on going.  Jon was thoroughly entertained for a good 45 minutes before he decided to turn around and head back down.  The truck was covered in mud and dirt, and Jon couldn’t have been happier.  It will make his day to clean all the gunk off it tomorrow.  A true testament to his manliness and masculinity.

After a lovely day off and an enjoyable trip outside of Cairns (aside from the leech incident, that is), we headed back home around 4:30.  We made a lovely Chicken Phad Thai for dinner, and we’ve decided that we’re getting good at this.  I feel sorry for our friend Judd, who had to sample the not-so-good first dish. (See Dec 10)  But we’ll make it up to him when we see him back in the States.