Warning: "continue" targeting switch is equivalent to "break". Did you mean to use "continue 2"? in /homepages/36/d189130010/htdocs/WP/wp-content/plugins/siteorigin-panels/inc/styles-admin.php on line 392
 heidic – Heidi Connal
Skip to content


NYU Stern reunion on the island of Menorca

Josh and Mindy wrote it better than I ever could:

Our last morning included breakfast, packing, swapping pictures, and leaving. In that order.

After breakfast and packing up, Allan took us on the boat to Vavau’a, where we caught our flight to Tongatapu.  Laura was staying overnight in Tongatapu, but the rest of us would catch a late flight to our various locations (for me that was to Auckland).  So we spent our last day together, taking in the Tongatapu sites.

We had to say goodbye to Eck at 7AM – he left early to get back to Singapore for his daughter and a birthday party. People leaving early is always a sign that vacation is coming to an end.

We had a 9AM boat time once Alan got back from town. Like the day before, there were more swells and lots of wind. Luckily, we had a few drops with a mama, baby and escort. On the first drop they turned and swam right by us – practically beneath Gary – it was so beautiful. On the second drop they swam beneath us.  And on the third, they swam past and away.

Alan joined us for dinner and told us the story of how he get to the King of Tonga to agree to sell him Mounu Island. He gave him “a pig and two fish” – which we all agreed would be an excellent name for his memoir.

We did a lot of fishing from the boat. They caught a marlin but it broke free before it could be reeled in.

Today was rough, windy, and bumpy with little to no whales. At the end of the day we got a call from another boat that they had a friendly mother/calf pair, but by the time we got there they had moved too close to a reef.  With the waves as fierce and rolling, Alan couldn’t get the boat close enough to let us in safely. If one of us got washed up on the reef there would be no way to get to us without damaging the boat. Such a shame, because the calf was essentially a big puppy dog who wanted to play. He kept rolling over onto his back and showing us his big white belly. It would have been fun to play in the water with him. A few times he came up from the water with his mouth open as if feeding. Pretty amazing, and something we’d not seen yet.

We got back to the island very late – around 4:00 – and we all disappeared from each other, tired of the day and the long ride back.

Gary’s Storytime: Since we skipped Storytime last night, we had two stories to make up for.

Spoiler Alert – no whale time today. They were out there and looked playful, but each time we got close they’d dive and disappear.  There were a few breaches and a few tail slapping so we’d go nearer and they would quiet down and go. A fascinating part of the morning was a pair of juvenile males who frolicked together in the waves and showed off for us.  We tried to get in the water with them but they were only in the mood to show off for the boat.

A sailboat anchored off the island, and the couple came to the restaurant for dinner. They were rather loud and annoying, so we whale-watchers silently agreed to skip Gary’s Storytime and hurried to the beach for a crab hunt.

We were in the water within 30 minutes, as a mother and calf were just off the island.  Mom was relaxed and laid-back, and the little girl calf was shy but curious. As we slowly approached we noticed how far the calf explored from Mom and how Mom just relaxed under water.  She’d go down to about 60 feet for a snooze.  And while she rested, the calf would hang with her, come up for a breath, check out us snorkelers, circle around the boat and play, come back to see us, and then go down to Mom.  She’d do this three or four times until Mom finally, slowly came up for a breath. Then they’d both swim for a bit, and Mom would go down for another rest.  And we’d repeat the entire routine together.  We stayed with them for an hour and a half – the maximum to be with a Mom and calf – and then left so an incoming boat could experience them.

As if they knew we were leaving, Mom and calf both breached to say goodbye.

A few lessons that stuck today:

1) Always find and stay close to the Mom. The calf will always come back to her, and if you chase after the calf you’ll just end up kicking all over the place

2) Let the calf come to you. Otherwise he/she will get scared away and the mom will swim off

In the afternoon we usually return to the island around 2:30 or 3:00. Tony and Emi always go snorkeling, and Eck and Serene often do as well. I find that I’m usually more inclined to nap and read. Lazy of me, but there you have it.

Gary’s Storytime: Ginger and the monkeys at the zoo

Our evening routine of Gary’s storytime accompanied by tequila continued. As did our crab hunting on the beach.

According to Tongan law, Sunday is a mandatory day of rest. No boating. No whales. No leaving Mounu Island.  Though we were allowed a sleep in, I woke up at 6:30 and had a sunrise walk with Otto all around the island.

After breakfast we all had a quiet morning of reading, writing, and photos. I spent 3 hours sitting on the deck and finally writing my journals from Uganda in June – all to the sound of waves crashing against the beach.

After lunch, Laura, Eck and I snorkeled all the way around the perimeter of the island. Parts of the water were very cold – Tony would later tell us that he can’t remember a day where the water of the island was this cold.  But we saw some fun little things: a sea cucumber “heat run”. Lots of fish. Laura found a little eel, which I promptly scared away trying to photo it with my wide-angle lens.

Water shortage: Mounu Island (and Tonga as a whole) is experiencing a draught and fresh water is at critical levels.  So we’re especially focused on water conservation and take “cabin showers” rather than full showers.  We still drink all we need to, but it’s a healthy activity to be forced to think of what we take for granted on a regular basis.

Gary’s Storytime: This evening’s story was all about Ginger’s first day of school and pancakes.

I woke up just after the sun came up after 6:00 and made my way to the dining area to journal and organize pictures.  There’s really nothing better than typing away with a coffee and the silence of only the surf.

The whales were evasive this day.  Lots of boating around and not finding any whales, or finding whales with too many other boats.  At one point we found a mama, a calf, and an escort, but they deliberately turned and swam away from our direction. After 10 minutes of following and hoping they’d slow and sit, we got the message and left them alone.

It seemed that the whales just didn’t want to play with us.  I teased Serene that I’d have nothing to write in the journal, so I’d have to dedicate this entry to her “Rape and Pillage of the Ocean”. Luckily she was saved. After lunch and almost time to head in, we were saved by the other Mounu Island boat – on loan to another service – who called to say they had a mother and calf who were close to the surface, would dive and swim, and then stay close to the surface again. It was the same mother/calf from the day before though a bit friendlier… until we got in.  Then they swam.  Each group of us had about 60 seconds in the water before they dove, and then we tracked them for a while from the boat.  Luckily, the calf was feeling energetic and showboaty, giving us a lot of photo ops. 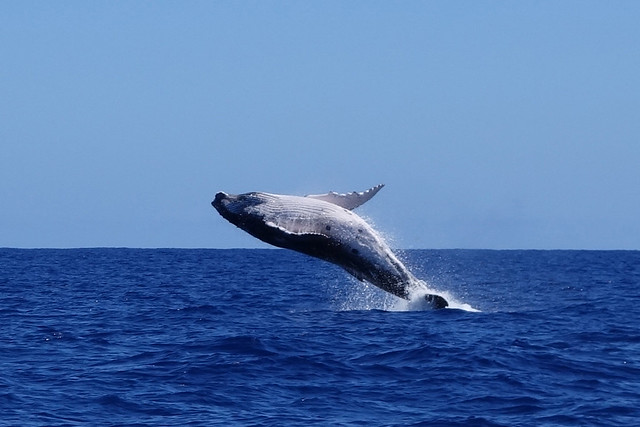 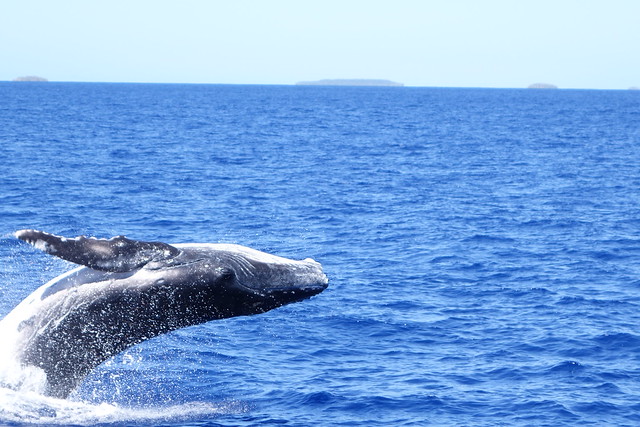 An hour of tracking, they slowed down and we tried for one more swim. Magical. Mama and baby just sat in the water, completely still. He was completely under her head and would occasionally come up for a breath.  One time he surfaced about 10 feet from me. Mama gave us a good 15 minutes with them – and it was extraordinary.  I’ll bounce around the ocean all day long if this is how it ends.

Arta Tequila: We’ve started a few group-driven traditions for ourselves here in the last whale spotting Tonga trip.  One is Tony’s bottle of Arta tequila, which he was gifted earlier this season from the owner of the company. Most of us associate tequila with crazy nights and horrible hangovers, but a good agave-based tequila like this is a delicious thing.  So we celebrate each evening with a round of drinks and I track the end-of-night bottle level with a camera shot.

Gary’s Storytime: The second tradition is a new one (here on day #3 together) which we kicked off the night before when we learned that Gary had written a collection of children’s stories.  We made him promise to tell us a story this night, which explains how we ended up sipping tequila and listening to the first chapter of Ginger and Mrs Peabody.

Crab Hunting: The final tradition – not unique to our group – is taking Otto crab-hunting. Otto knows it’s coming, so he starts circling after the dessert plates are cleared, his little feet tapping and his nose huffing as he waits impatiently for us to go to the beach.  The process of the crab hunt takes a few different elements:

1) Running down the beach with our solar-recharable lights

3) Calling his name with great enthusiasm, “Otto Otto!  Otto Otto!” and frantically pointing to the hole

6) Moving OttoOtto along when the crab starts to play dead in defense “Come on Otto!  Otto Otto!”

It’s the last thing we do before turning in for the night, which is usually around 9:30.