Beautiful weather – again. But this day was very little water time and a lot of boating around the islands. No complaints there; the scenery was gorgeous and the company fun.

We ran across a number of mother/calf pairs out in the blue, but we also had a number of boats cluttering the ocean and aggravating the whales enough so they dove.  We also had a few heat runs at a distance. But everything was fast moving so we had little chance to get in.  There was one set of mama/calf in a little cove that we found, long after lunch, but they were evasive.  Each time we went in the water they went deep. We could see the white of the calf’s belly but it was down, down, down.  And when they came up for air they came up and dove deep again.

We were dry, but happy. We usually returned to the island around 2:30 in the afternoon and spend the rest of the day snorkeling, napping, and reading – in no particular order. This day was sand dollar hunting with Serene and Eck, then reading until the sun went down. 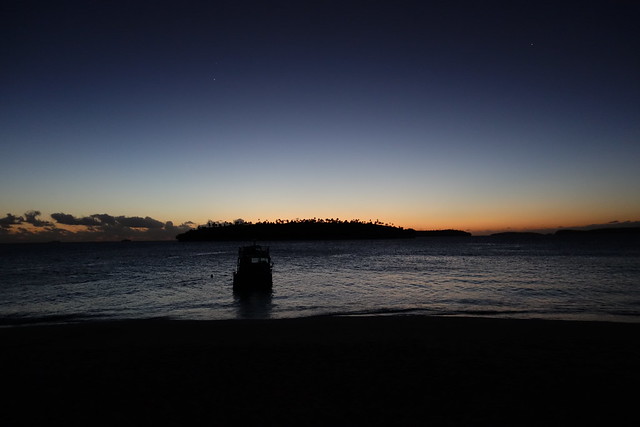 Dinner was sashimi from the fresh catch the night before, followed by the lobster tail and our (now traditional) tequila shots.  Lots of laughter at the table tonight, sharing stories about each others’ children and teasing Gary about some cartoon character named “Peggy Pig” or something. Then we discovered he has a collection of children’s stories in his head.

The evening was closed up with a rousing crab-hunting round with the ever-ready Otto. He found a few and took his frustrations out on the crustaceans – having been spurned by his doggie girlfriend that day in town. Poor pup.