Gorilla Day:
4:45 Wake up
5:00 Breakfast and pack lunch
5:30 Departure
7:40 Arrival at Bwindi Impenetrable National Park
8:00 Separated into 3 groups. We were myself, Emmely, and the Swiss (Daniel, Francesca, and Sabrina) and assigned to visit the Nshongi gorilla family. Our guide was John. Another John.

John briefed us on a number of things:
• Hike Time: Could be 2-4 hours, depending on where the Nshongi family had relocated to during the night. The trackers had already left to go to yesterday’s location and track them to their new one. John estimated about 2 hours but we’d need to see.
• Fire Ants: We were instructed to tuck our trouser legs into our socks to protect our ankles and feet from their bites.
• Water: Water. Drink lots of it.
• Note about “habituated” – they are used to humans but not dependent on them. And they know we are not a threat. They see 8 tourists in the AM and 8 in the afternoon – for 1 hr each visit. We were well prepped.

The Hike:
Our hike was two hrs into the forest. Uphill. The trail started with wide paths, then medium, then narrow and surrounded by bush. We hiked in until John could hear the trackers, who had confirmed that they tracked the gorillas to the current site. As we got closer we could hear them call out “woo!” and John would respond “woo!” And then we moved into the bush, hacking through trees and brush to get to where the gorillas were.

As we got closer, we could hear the branches breaking from one of the gorillas in the tree. Then we saw the silverback. He was huge and beautiful.

Then the silverback came down and started walking through the brush. We were amazed at how quickly he disappeared into the camouflage of the bush, though he was only a few feet away.

Nearby, two gorilla babies climbed up a tree to play. As they climbed higher and higher, the weight of their little bodies bent the tree over they landed on the ground in a plop:

A female gorilla passed us as well, but none of the family was feeling terribly sociable or photogenic. The silverback would sit for a bit and let us get a handful of photos, but then he’d get bored and would move easily along. We’d move slowly after him, cutting through the bush and listening closely to any sounds or signs of annoyance by him. When he’d slow down and make his grunting noise, our guides – and eventually, us too – would make a low voice throat-clearing noise to show him respect and deference. 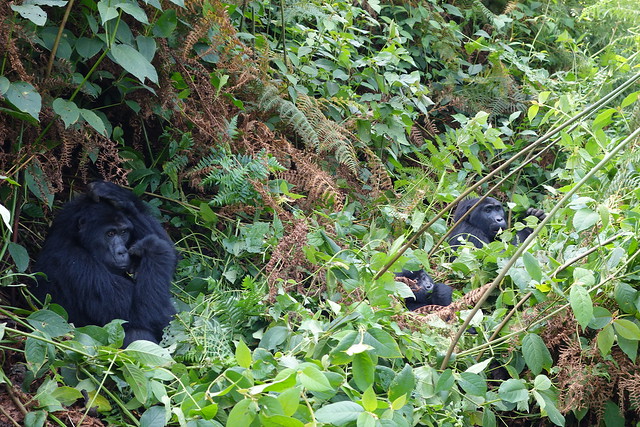 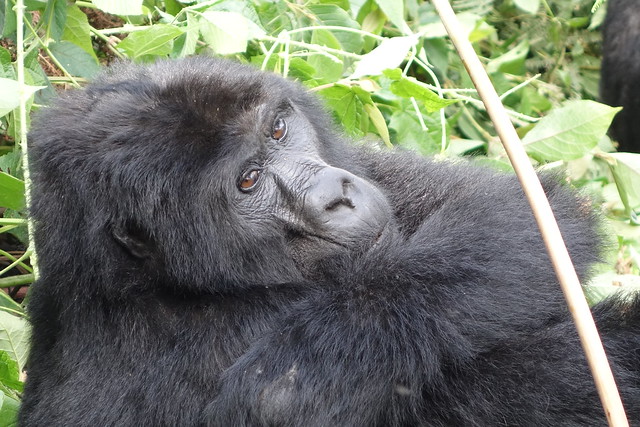 Two hrs later, we were still there – tracking them around the bush. I like to think it was because we were such a great, respectful group. Or because John liked us. Though it’s likely he felt badly because each time we found one of them they’d turn their back and disappear and we’d have to work twice as hard to find them again. Having said that, the whole experience was amazing: the hike, the proximity, the bush hunt, the human features, the wonderful group of people. It was worth the extreme uphill trek.

We got down in about an hour as it was almost all descent. John debriefed us with what a good job we did and he encouraged us to tell our friends and family to come too. Then we “graduated” (said John, “You must clap.”) and began the long 2 hr drive back to Bunyoni Overland Resort.