Someday it will occur to me that – as much as I love adventure and wildlife trips – they always require early-morning wake-ups. Diving, safaris, gorillas – these are not lazy, sleeping-in holidays. So our 6AM departure should not have surprised me at all. The only wrinkle in the process is that I’d planned to leave my work roller bag at the Red Chili Hideaway and pick it up when we returned, but there was no one at the front desk to lock it up. So John said “You can’t just leave it there – we’re put it into the truck”. And away we went. Jimmy Choos and all.

The truck is almost exactly what Jon and I rode in during our Africa trip in 2001 – what we called a “bus-truck”. It’s a bus that fits all of us relatively comfortably, all our backpacks, camping gear, and groceries for the road, and has four-wheel drive for the rough patches.

Our campsite for the evening was a quick stop-over. Nothing elaborate or special, and no showers. Just a “shawer”.

We had an afternoon tour of the tea fields by a man named Robert and his trainees. He taught us a great deal about how tea grows and how it adds to the Ugandan economy.

Dinner was a stew of meat veggies and rice. The bus-truck did have a chore chart, though John’s rules were “just everyone pitch in” which means – after a day of observing – that no one really does.

Before bedtime a group of kids from the local orphanage came to perform some dances and songs for us around the campfire. They rounded it up by singing “Happy Birthday” to Emily and Mags. I crawled into my tent to fall asleep, but not not until 2AM. Darn jetglag. I listened to the sound of the baboons in the trees until I fell asleep. 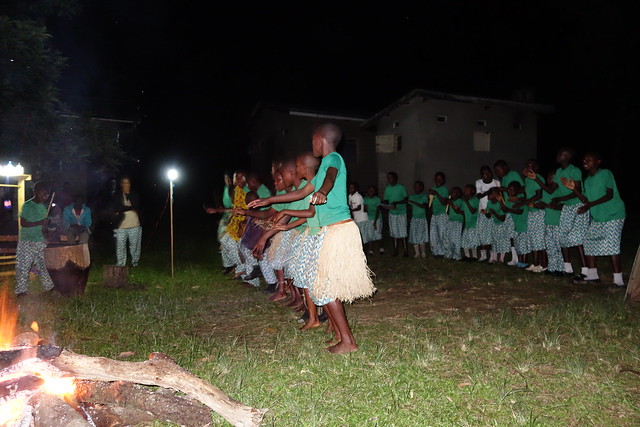