Finally to the Galapagos!  We met in the hotel lobby at 6:00AM and were out the door by 6:20 to the aeropuerto for our flight to San Cristobal. The flight was uneventful and filled with westerners headed to the islands. We did make a stop… Somewhere… To let people off and other people on and to refuel.  And the most exciting thing was during refueling, when the flight attendant told Liz she needed to unbuckle her seatbelt while the refueling was happening. I’m sure there’s a logical reason for that.

In San Cristobal we met Pablo, our guide for the next 7 days, who took us to out hotel to unpack and change. Then we went for a brief walkabout around the shoreline.  Here we saw our first of many sea lions and crabs. the sun was brutally strong and the weather hot. Neither of these things are complaints, since one can’t really complain about the Galapagos. 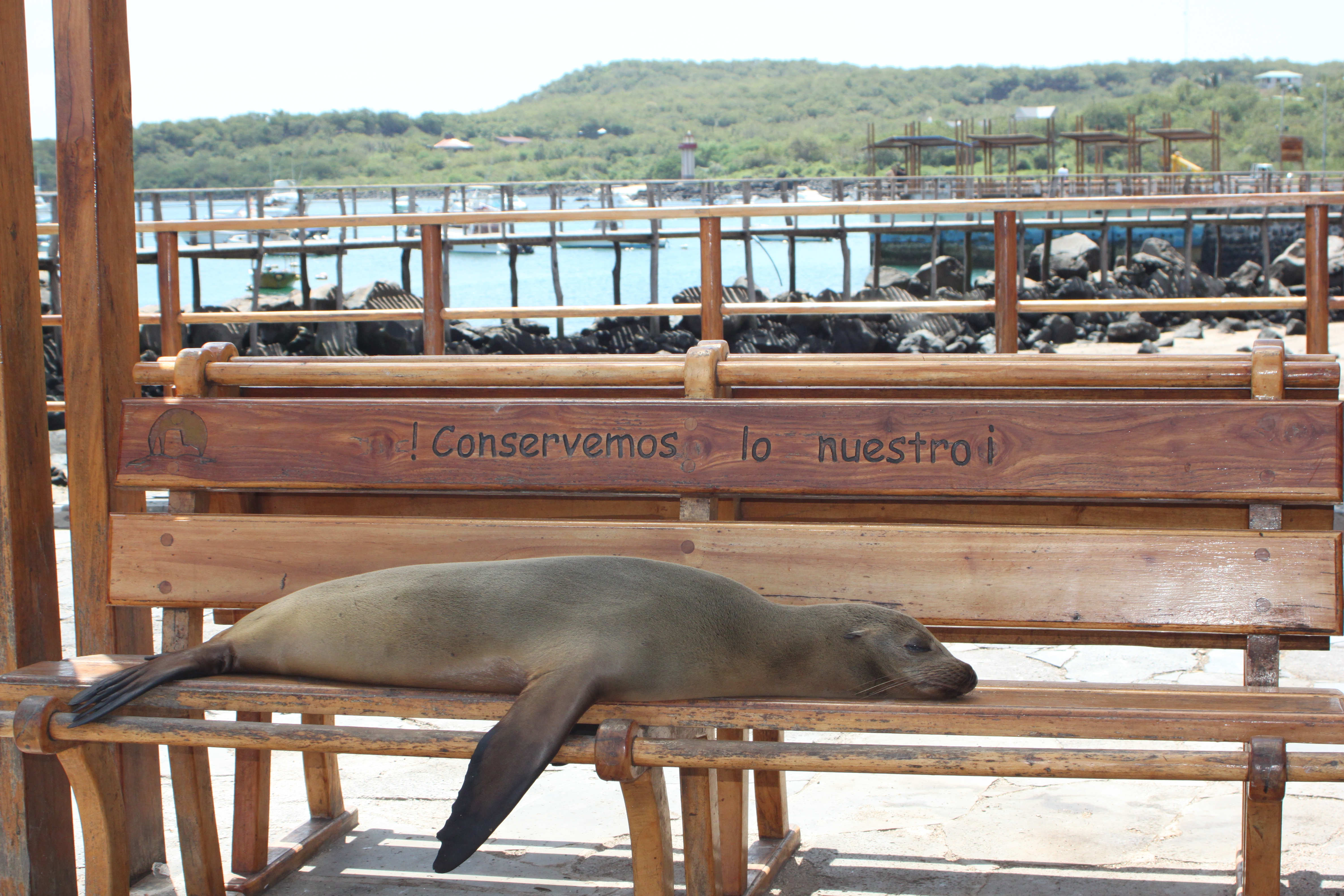 Lunch was at a local spot with a starter of a hot vegetable soup – surprisingly tasty on such a hot day – and locally caught fish.

Our afternoon excursion was a mountain bike ride from the top of a hilly area and down to the beach.  We started at the top of the hill at a small church, where Pablo gave us our first taste of his story-telling skills.  He explained the difference between species types:

1) Transported – brought onto the islands by settlers. Like guava or passion fruit

2) Native – came to the island by their own natural way. Can often be found on other locations as well (such as the mainland)

3) Indigenous – came to the island as “native” but evolved into a species specific to living on the island.

It was interesting to hear that guava and passion fruit – two fruits we associate with islands and the tropics – actually have a negative impact on the environment.  They take over the native vegetation and grow over it, essentially smothering the local plants. After our talk and a few pics of the view, we got on our mountain bikes and spent the rest of the day cruising around San Cristobal.  I forgot how much I love mountain biking. I have a road bike in the city which is a lot of fun, but there’s nothing like riding over bumps with a mountain bike. It was great. Made me think of the cycle safari I did in Botswana in 2006. So spectacular.  What also made me think of Botswana is poor Fany, who hit a patch of gravel, skid, and flew off her bike – almost exactly the way I did in Botswana. She was as proud of her war wounds as I was of mine; maybe prouder since hers were much more expansive.

After an hour we parked our bikes at a beach way and spent time on a nice afternoon walk along the shore where we saw our first marine iguana and a number of sea lions.

Pablo is a plethora of information about the flowers, the birds, the sea lions, and the Galapagos in general.   He tells us everything and then tells us more, and as we wander around he also asks if we have questions he can answer.  We’re going to learn a lot on this trip – and I love that.

Despite our lengthy trip to the beach, our hotel was a short ride around a few corners. We showered and rested and then changed for a group dinner of chicken, fish, and what seemed to be the most delicious beer ever.

We tried to stay awake for as long as we could, but Liz and I were both asleep. By 9:30.