We finally, on Day 3, we discovered the omelet station at the Tamaca Beach Hotel. It was SO much better than runny eggs.

Trip to Tayrona
To get to Tayrona National Park, we had planned to take a taxi to the public market to catch bus to Tayrona. But we wisely reconsidered when presented with the option of a private taxi to Tayrona. Incidentally, this was the third time we’d asked about the option and prices, but the price – while always consistent – was also significantly more than the taxi-to-bus-to-park option. But then we met Luis, the charming Colombian grandfather who offered to take us all the way there. And the taxi was so comfortable. So we paid for the luxury of *not* taking a bus. Luis took us to Olympics Groceries for some provisions then to his house so he could get some money. We briefly met Rosa, his sweet wife of 39 years. Together they have 5 kids and 2 grandkids. Luis at his home

Tayrona National Park
An hour or so later, arrived at The Tayrona Park entrance. Tayrona was established in 1964 as a national park but soon became a war zone and haven for drug trafficers. Over the last ten years the government of Colombia has successfully preserved the natural resources and turned the park into the eco-tourist spot it should be. And it’s stunning. 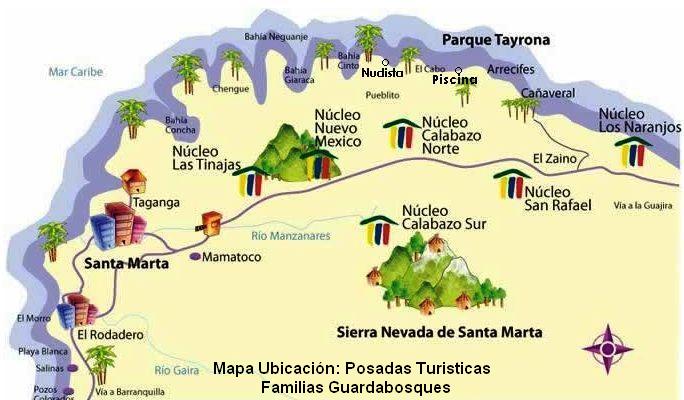 Luis helped us with park tickets and drove us to start of trail. Ji and I detoured for the banos and followed signs for Arrecifes. The weather was crazy humid and so it was a very sweaty hike. Along the way we saw industrious ants, horses, trees, and huge mounds of mud from the recent rain. After an hour of hot, sweaty, soggy hiking Arrecifes greeted us with wide, gorgeous beaches and crashing waves. It was absolutely beautiful. We went “native” and took our sneakers off to walk toward La Piscina, the swimmable beach. It was a good thing, too, because there were parts of the beach where we had to wade through deep troughs of water. Trekking through the beach forest

At La Piscine we snagged a log under some trees and relaxed. We read our books, we snacked on snacks, we stayed out o the sun, and we just enjoyed the general quiet. There were other people on the beach, but these were people who hiked an hour in – just like us – so they were kindred spirits. A smattering of people You can actually get a Blackberry signal out there; who knew? On way back to the path we ran into Carlos and Sabrina, our cross-continental travel friends from scuba the day before. We were hot, sweaty, and thirsty so we sat and talked to them for a while. The we started to walk toward the same trail we’d followed on the way in. That’s when we ran into an American who came from another path and we realized that we’d taken the horse trail rather than the people trail. So we turned and took the People trail, which was much more groomed and gentle. There were wooden planks, wide paths, and lovely scenery.

And then, not 30 seconds after I commented how much nicer the trail was, we ran into the flooding. We started to doubt we’d taken the right trail after all, but we powered through in our soggy state. This is why Ji will always be known as “Squishy” I was “Lefty” because only my left foot squeaked But at least it was scenic

We did get beachside again and the sand was a menace. Our shoes and socks were so wet that the sand got in and rubbed against our skin. We were also sweaty and smelly. Very very attractive. But it was a lovely walk.

We got back at the main gate and waited for Luis to pick us up, thankful that we didn’t have to take a bus and then a taxi. Luis would take us straight to our hotel. But first he had to get there. Since we were an hour early we just hung out on the steps and waited, squishy. Cleanliness
It was a quiet, exhausted ride back to the hotel where we each took long showers to got clean. Though we were both obsessive about sunscreen and coverage, Ji forgot to put it on her neck and so had red skin to perfectly memorialize the shirt she wore on the hike. Sunset from the room

Dinner at Donde Chucho
We left for dinner in Santa Marta a little after 7PM (no, we didn’t walk there) at Donde Chucho – well known for its seafood and margaritas. We got both. It was a warm night with a light breeze, so we ate outside and started with garlic shrimp. I had coconut-crusted langoustines and Ji had seafood risotto. The table near us has pizza cones, which peaked our interest but not enough to return. Back at the hotel, Ji was assigned he task of summarizing the day in the journal. This was my not-so-secret attempt to keep her from falling asleep before 10PM and subsequently waking up at 6AM. It worked!